The 2020 European Figure Skating Championships started yesterday with a big shock when France’s Kevin Aymoz failed to qualify for the men’s free skating.

The 2019 Grand Prix Final bronze medallist skated third to last in the opening event, the men’s short programme, and the French skater had the ultimate nightmare with two falls and a popped triple Lutz that counted for nothing. He was 24th with two competitors left to perform and ultimately ended up 26th and his European Championships over. 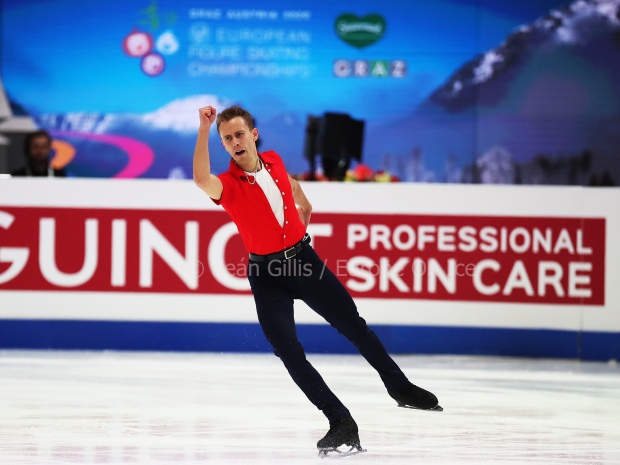 With a first European title up for grabs for all the participants here in Graz, Austria, it was Michal Brezina from the Czech Republic who stood on top of the standings after the short. The veteran was the only one of the top contenders to skate clean.

Coincidentally, Brezina’s only previous occasion on a European podium was back in 2013 when Spain’s Javier Fernandez won of the first of his seven European titles. There were many here in Graz and watching all over the world who missed Fernandez this week as a skater and a person. However, a new champion will be crowned tonight and it is worth remembering that before the Spaniard became the great champion he is he had his own fair share of struggles at competitions.

Home interest was focused on the pairs event with Miriam Ziegler and Severin Kiefer delivering a heartwarming routine to rapturous local applause. The Austrians revived their “Sunshine on Leith” programme and skated a clean short to put themselves in sixth place.

With the absence of reigning champions Vanessa James and Morgan Cipres, Russia holds the top three spots at the midway point of the event. Aleksandra Boikova and Dmitrii Kozslovskii set a new personal best of 82.34 points to put themselves on course for a first European title. They were followed by Daria Pavliuchenko and Denis Khodykin in second and former two-time champions Evgenia Tarasova and Vladimir Morozov back in third after a costly error on a lift.

The championships continues this afternoon with the rhythm dance and the men’s free skating.