Following a post-surgery break for rehabilitation and a change of scenery last season,
American ice dancers Madison Chock and Evan Bates are on the rise once more.
At the end of the 2017-2018 season, Chock and Bates stood at a crossroads. Faced with
battling an ankle injury Chock aggravated at the 2018 Olympics and stagnating results,
the on-ice and off-ice duo made a bold choice to leave their longtime coach Igor
Shpilband and relocate from Novi, Michigan to Montreal, Canada to work with Marie-
France Dubreuil, Patrice Lauzon and Romain Haguenauer.

“We were in this kind of intermediate position where we knew we needed to make a
change if we were really going to find the next level for our skating,” Bates recalled.
“We felt we were not improving as much as we had hoped, not getting the results we
wanted, just not skating with the inspiration that we wanted to skate with. When we
decided we would go to Montreal, we were accepted into the school and it felt like a
fresh start. It has really been a life changing experience for us in the short time we have
been there. We feel like they have reinvigorated our passion for skating and they have
opened our eyes to what more we can do. We still know that there is more that we have
left to learn. It feels like we are in the perfect place.”

Their new training environment has been quite a contrast to their former one and the
Americans believe it has brought a new perspective to their skating and enhanced their
technique.

“In Montreal, there’s a very strong infrastructure,” Chock explained. “It’s a big
collaboration between many coaches. Coming from Novi, we were only really working
with Igor on the ice. Going from having one head coach to having three head coaches
and multiple assistant coaches, it was a very different atmosphere. There was a lot more
collaboration and unity. All the coaches seemed to share the same voice and values. It’s
really nice when you’re working with a large team of people like that on the same page
and not going from one coach changing everything to another coach changing it back.”

“We had both been coached by Russians all of our lives,” Bates said. “Moving to
Montreal and working with Canadian and French coaches who had a little bit different
technique has been great for us because we have the Russian technique from childhood.
Now we are learning a different technique and it has allowed us to create a different
kind of blend that has worked for us.”

“Just being open to the new technique and all of the information that was coming in was
a very helpful thing,” Chock added. “We’re our own hybrid now.”

“I’m 30 years old and I feel like I am still improving,” Bates said. “It’s a big part of the
reason why we are still skating. We’ve thought about it before. If we hadn’t moved to
Montreal, what would we be doing? I’m not sure that we would be skating still or certainly not feeling the way we are feeling about our skating – the excitement and
looking forward to what’s to come. I think a big part of that is feeling progress in our
own skating. It’s really satisfying and gratifying to know that the work is paying off for
us.”

After Chock’s surgery on 6 April 2018, the team did not compete again until January
2019 when they won the Torun Cup in Poland and finished second at the United States
Championships where they secured selection for the Four Continents and World
Championships.

They picked up gold at Four Continents in Anaheim, California and travelled to
Saitama, Japan for Worlds to conclude their abbreviated season.

“Winning Four Continents was a big highlight for us and a big moment in our careers,”
Bates said. “It was our first ISU Championship victory and then I think our expectations
were raised going into Worlds. We finished sixth which we were disappointed with.”

“We felt we had made so much progress and skated really well,” Chock said. “It just
wasn’t our time I suppose in the eyes of the panel. For us it felt like a very successful
season considering the past few seasons and surgery and everything we had gone
through.”

“Regardless of the result at Worlds not being as high as we would have liked, it was
okay,” Bates said. “We knew that we were finally healthy, so we used the summer to our
advantage. We worked hard to be prepared and compete early and make sure that we
would do our full season this year and do two Challengers and make up for what we
missed last season.”

This season the Americans selected “Too Darn Hot” from the Cole Porter musical “Kiss
Me Kate” for their rhythm dance. Whereas most rhythm dances tend to combine two or
more different songs to comply with the rules, the piece offers appropriate tempos all in
one place.

“It’s blues, swing, Charleston, quickstep all in one song, so it has so much variation,”
Chock said. “It keeps the programme very cohesive and it’s just a fun song. It’s very
flirtatious and playful.”

“The other programmes we were considering were really formal and this one has the
opportunity to get a little bit more wild and loose and the swing at the end is really fun
to do because you can let it loose a little bit,” Bates added.

For their free dance, Chock and Bates, Dubreuil and choreographer Sam Chouinard
have come up with what they have dubbed “Egyptian Snake Dance” which combines
three pieces of music – “Yearning” by Raul Ferrando, “Sahara Nights” by DJ Quincy
Ortz and “Layali Al Sharq” performed by Al-Ahram Orchestra. The theme is very much
a departure for the Americans from previous programmes they have skated.

“The music was the main inspiration,” Chock said. “Marie came up with the concept of the snake and the traveller. It was just a very fun process from there. Once we had the
basic story, we let it go and take off and inspire our elements and our movements.”

“I am a traveller who finds her in the desert,” Bates continued. “First, I am scared and
then intrigued. As the programme goes on, I am more intrigued and fall in love with the
snake because it’s woman. But it’s a snake. I think there is just a lot of creativity to be
expressed in this kind of story. For us it’s something that’s so different to anything
we’ve done before. Especially for Madi, it suits her so well with her movement and her
look on the ice. It’s been a really good programme for us.”

“We’re changing as skaters and people,” Chock said. “I think we’re going in a direction
we want. We’re on the right path. We’re taking more risks and we’re pushing ourselves
to a different level of creativity and artistry. Our current programmes are a tribute to
that.” 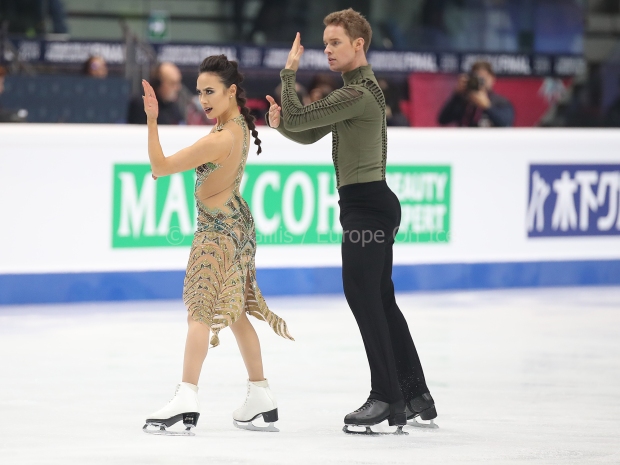 Chock and Bates began this season with two wins at ISU Challenger series events in the
United States and Finland. They skated at back to back Grand Prix assignments in
France and China and took silver at both competitions. In December, they returned to
the Grand Prix Final podium for the first time since 2015 when they won another silver
in Turin, Italy.

Chock and Bates now have their eyes set on regaining the U.S. national title they last
won five years ago in 2015. The U.S. Championships will be held in Greensboro, North
Carolina this week where they will be competing against training partners Madison
Hubbell and Zachary Donohue. While both teams are vying with each other for top
honours on the ice, they maintain a close friendship off it.

“It’s nothing as dramatic as anyone would imagine,” Chock said. “We’re actually very
good friends. We get along really well. That’s pretty much it. No drama.”

“We’ve both been national champions and world medallists.,” Bates said. “There is a
healthy competition between us certainly, but I think all of us are mature enough to
know that the rivalry in skating would never be worth more than the friendship and that
it would never come between us in that way. I think that kind of perspective is also
repeated in the school and the way the coaches and everyone at the school is taught and
the respect everyone shows for one another every single day at the rink. It’s no surprise
that we would get along well and still be close rivals.”

This season will culminate with a “home” World Championships for Chock and Bates
in Montreal where they will be seeking to return to the podium for the first time since
2016. Over the past two seasons, they have gotten used to competing against the
familiar faces they see day in and day out at their training sessions.

“It’s such a privilege to skate with the best in the world,” Bates said. “While we have
said a lot about how wonderful the coaches are, and they are, there’s also a certain
component of learning that is just visual and when you are sharing the ice with the best
skaters in the world that is the best lesson you could ever have.”

“You just inspire each other,” Chock said. “There’s an extra magic to it.”

“It also makes competitions feel easier,” Bates said. “When you go to a World
Championships, it’s nice to have that familiarity with a lot of the couples.”

The couple have a few pieces of advice for those travelling to the World Championships
in March who may not know Montreal well.

“It’s going to be cold,” Chock said. “I would say bundle up and get your metro pass
because you’ll be using that a lot. There are a ton of good restaurants in Montreal, so I
would say research beforehand and pick your restaurants.”

“Old Montreal is very charming,” Bates said. “What I think is amazing is that Montreal
is the split between it being a metropolis, but also having all this nature.”

Beyond this season and midway through another Olympic cycle, Chock and Bates feel
like they have unfinished business in skating.

“The big goal is to win an Olympic medal in 2022,” Bates said. “Our experience in
PyeongChang was disappointing. We didn’t want to finish our Olympic experience with
that sort of performance and those kinds of memories. Not that it’s tragic or the end of
the world. Other people have fallen at the Olympics. We would like to get back there
and step off the ice feeling that we skated well.”