After an absence of almost a decade top level figure skating returned to Turin’s Palavela and as ever with Grand Prix Finals the competition flew by in a blur of outstanding performances and emotional moments. 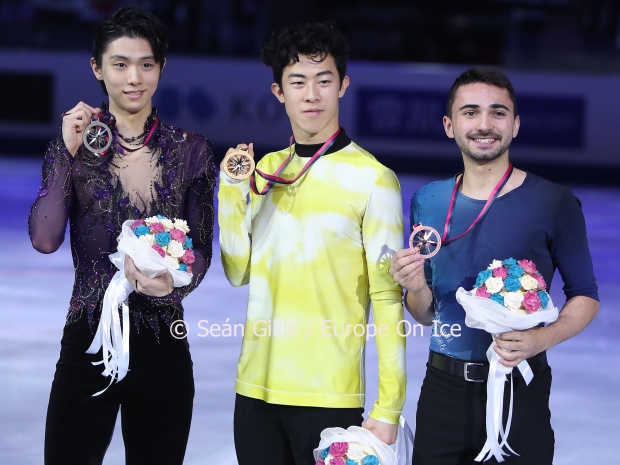 It is fair to say that most of the audience in Turin was here for one event – senior men’s singles. Expectations for the match-up between Yuzuru Hanyu and Nathan Chen were high. The two skaters had last met in a Grand Prix Final back in 2016 (injuries prevented Hanyu from competing in the intervening two years), but Chen had won Worlds in Saitama, Japan earlier this year. In the end, it was no contest. Hanyu botched a quadruple toe loop combination in the short programme whereas Chen was foot perfect. Two days later on his birthday, Hanyu tried his hardest to close the gap in the free skating with an enthusiastic crowd willing him on. However, just as he had at Worlds, Chen took to the ice right after the double Olympic champion and all those stuffed Winnie the Poohs and calmly reeled off a flawless free. 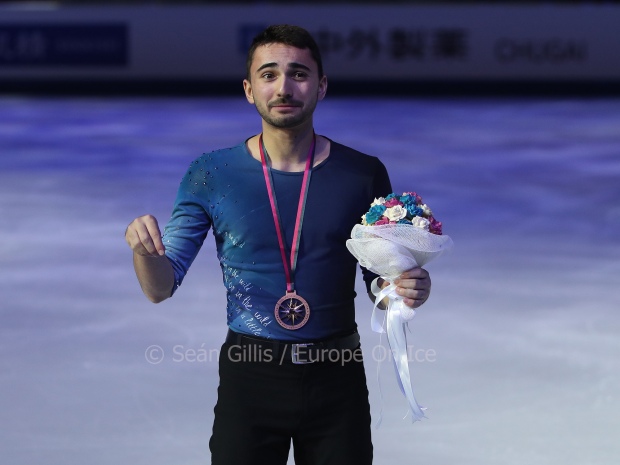 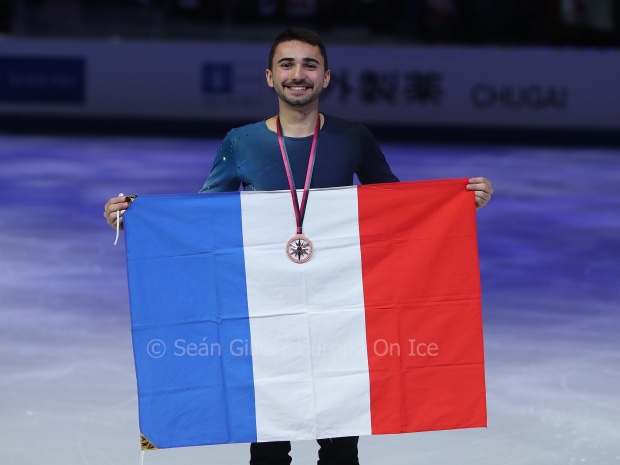 Kevin Aymoz was perhaps even more delighted than the gold and silver medallists as he took home a somewhat unexpected bronze medal behind Chen and Hanyu. It was so unexpected that he and no-one on his team had thought to prepare a French flag ahead of the victory ceremony. Aymoz played fake disappointment at the lack of a tricolour and eventually one was found for him. 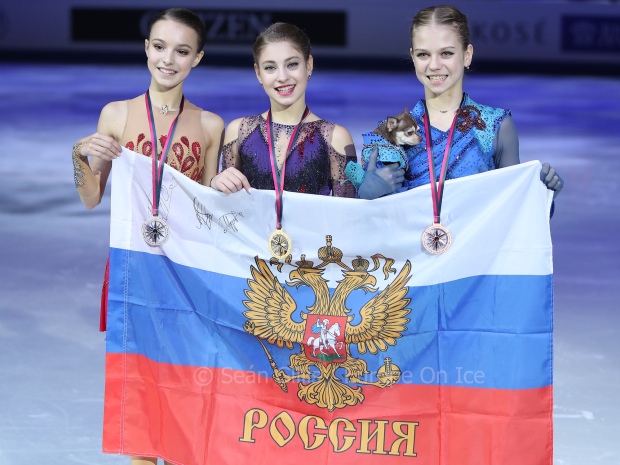 As predicted, the senior ladies event turned into a straight fight between the three Russian debutants who had swept all the Grand Prix titles between them on their way to Turin. Alena Kostornaia posted a new world record score in the short to give her the edge going into the free and Anna Shcherbakova and Alexandra Trusova could not close the gap finishing behind their teammate in that order. Olympic champion Alina Zagitova placed second in the short, but things fell apart for her in the free and she dropped to a lowly sixth place. It is hard to see beyond the three medallists for the Russian team for Europeans and Worlds later in the season. 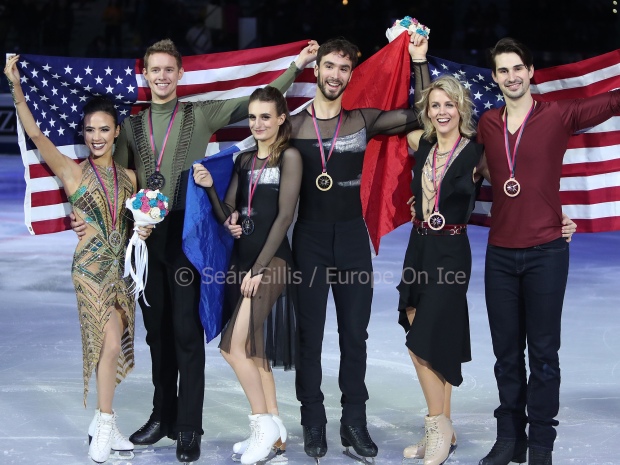 The Palavela was the venue for the infamous original dance at the 2006 Olympics. Fortunately, there were no death stares or falls this time round. Gabriella Papadakis and Guillaume Cizeron did make an uncharacteristic error in their rhythm dance midline step sequence where Papadakis stumbled. Such is their calibre that they could afford that error and still finish ahead of the rest of the field in that segment. The French performed another solid free dance to win only their second Grand Prix Final title. There was a resurgence in fortunes for Madison Chock and Evan Bates who picked up the silver medal here in Turin with Madison Hubbell and Zachary Donohue making it a clean sweep for the Ice Academy of Montreal. 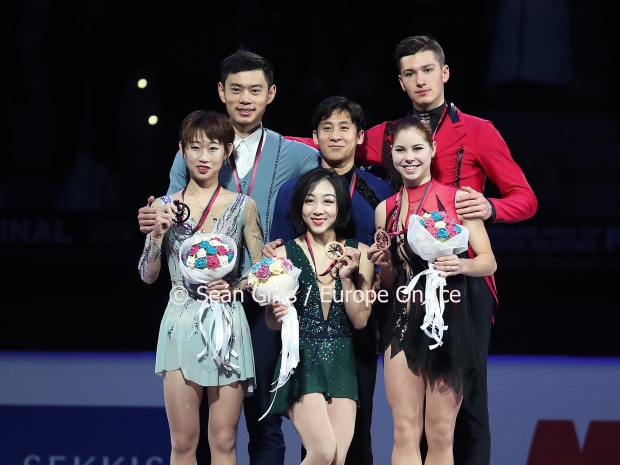 Wenjing Sui and Cong Han had incredibly never won a senior Grand Prix Final title before. They corrected that blemish on their record this weekend and Cheng Peng and Yang Jin captured the silver. China had last put two couples on a Grand Prix Final podium back in 2010 when Sui and Han took bronze. Aleksandra Boikova and Dmitrii Kozslovskii were in contention following the short, but their quest for a medal fell apart in the free leaving Anastasia Mishina and Aleksander Galliamov to step on the rostrum in third.

The Junior Grand Prix Final was run concurrently to the senior event and gave us a glimpse of the future. Kamila Valieva extended Russia’s winning streak in the ladies competition to ten, despite having trailed American Alysia Liu after the short. Liu landed a triple Axel-triple toe loop in her short programme, but had to settle for second in the free. Japan did get a gold medal in the men’s event with Shun Sato taking the honours. Unsurprisingly, there was a Russian sweep of the pairs medals, while Georgian ice dancers Maria Kazakova and Georgy Reviya took home their country’s first Junior Grand Prix Final title and medal.

This brings the first half of the season to an end with eyes now turned to National and ISU Championships over the coming weeks and months. The Grand Prix Final has given us an indication of how things stand, but it is not the final word. What is certain is that this weekend for skating passion lived here. 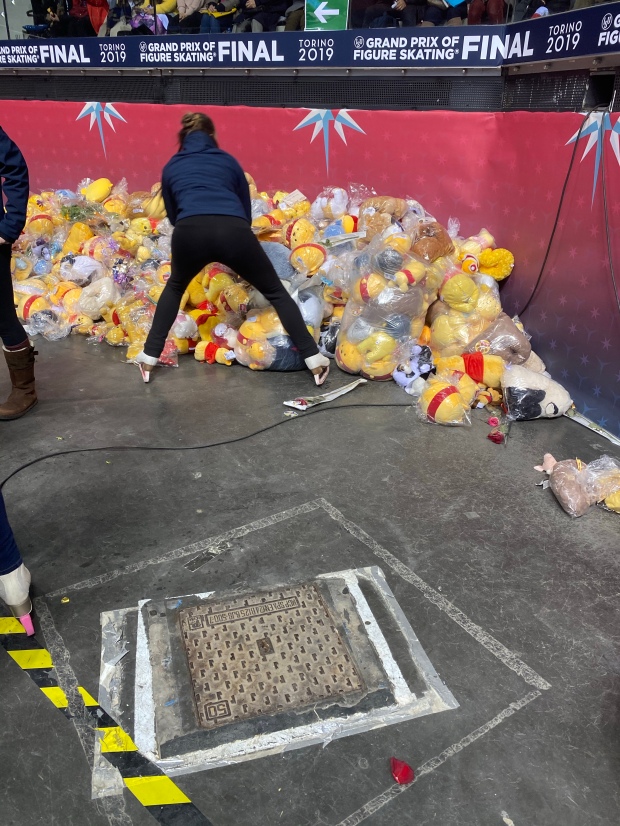