Inside frosty interior of the Patinoire Polesud, the competition got under way at the Internationaux de France on Friday in Grenoble as the skaters burned up the ice with their performances.

Friday morning saw clearer skies over the city and even glimpses of the Alps from behind the mist on the way to the rink. The main topic of conversation this morning with our colleagues in the press room was the temperature of our accommodations. While Europe On Ice’s digs is a tad on the warm side, one of the hotels closer to the rink kept the thermostat at a balmy 26 degrees celsius round the clock. The very chilly rink came as a welcome respite until a couple of hours in and feet began to turn to blocks of ice.

The coolest kids on the block today were Gabriella Papadakis and Guillaume Cizeron who surpassed their own world record rhythm dance score. The four-time World champions unveiled their new costumes for their “Fame” routine and the outfits and the choreography were about as far from anything they have ever done before. They are a full eight points clear of training partners Madison Chock and Evan Bates who had an exceptionally good day at the office themselves. Just not as good as the French who unbelievably have room for improvement in their score. 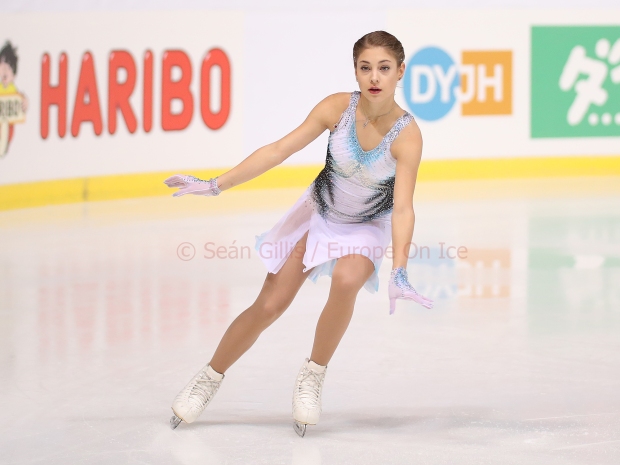 While the press conference for the rhythm dance was reaching its conclusion, Alena Kostornaia stepped out on to the ice for her debut Grand Prix event. The Russian was a completely different skater to the one who was crying tears of frustration on her opening day of practice. She landed a triple Axel right off the bat (although it was subsequently deemed to be under-rotated by a very tough technical panel) and she sits in first place going into the free skating. Close behind is Olympic champion Alina Zagitova who got both an edge violation and an under-rotated call on a triple Lutz-triple loop combination and a few points back is Mariah Bell who channelled her inner Britney Spears for a lively routine.

There was not a single clean skate in the men’s event, but Nathan Chen stood on the top of the pile as expected with another one hundred plus score. Alexander Samarin from Russia was not too far behind. A distraught Kevin Aymoz wound up in third in his home city and will be hoping for a better skate on Saturday for friends and family here to watch him. Shoma Uno was perhaps the most supported skater of the day, but conversely cut a lonely figure before and after his programme as he is going coachless at the moment. Even with two falls, Uno is in fourth place which says a lot about what kind of an event it was.

The pairs brought proceedings to a conclusion and two Russian teams head the standings. After silver at Skate America two weeks ago, Daria Pavliuchenko and Denis Khodykin look set to book themselves a place in the Grand Prix Final for the second season a row as they lead the field. Anastasia Mishina and Aleksandr Galliamov are only in a good position should their compatriots falter.

The heat gets turned up another notch on Saturday with the medals decided in all four categories and everyone will be trying to stay cool. But not too cold!