Even with a string of European and World titles to their names, Gabriella Papadakis and Guillaume Cizeron refuse to rest on their laurels and this season are pushing the creative boundaries of the sport yet again.

On the morning of the first day of competition at the Internationaux de France, Papadakis and Cizeron took to the ice at the Patinoire Polesud in Grenoble in their competitive costumes for their “Fame” rhythm dance official practice. Accustomed to seeing the French ice dancers in elegant and understated outfits down through the years, the pink and blue spandex was certainly an unexpected departure for those who had gathered to watch. However, once the music kicked in for their run through, it all made sense in the context of their eighties themed routine. Later that day in competition, they set a new world record of 88.69.

The programme almost never saw the light of day. The idea of basing this season’s Broadway-themed rhythm dance on the musical set in a New York school for the performing arts was brought to them by their coach Romain Haguenauer. Born in the mid-1990s, neither of the skaters were familiar with the film, television series or the musical versions of “Fame” and were initially resistant to the suggestion.

“I think we were scared to do something that was a little bit out of our comfort zone,” Cizeron explained. “We wanted to be fun without being ridiculous, so it was quite a challenge, but that was also what was exciting about it. We wanted to try something different than what we have been doing in the past and that was a good opportunity to show a different side of our skating.”

The French were pleased with the reaction from both the judges and the audience to the programme in Grenoble, their first international competition of the season.

“It’s very out there and you can’t go half-way,” Papadakis said. “We were scared that it would appear weird to people, but it was really well-received so now we are way more confident.”

“It’s a programme that really makes sense in front of an audience,” Cizeron added. “Rehearsing it at practice with normal clothes on and nobody watching, it feels a little flat. It really grows and it takes all of its magic when the public is there, and we felt they were really enthusiastic. It was a good feeling.” 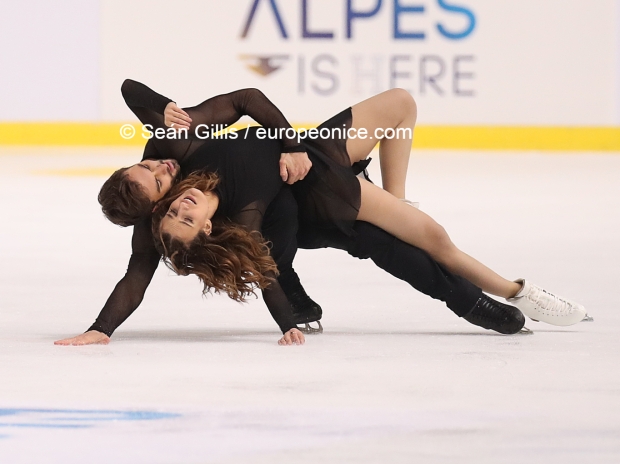 In contrast to the crowd-pleasing rhythm dance, Papadakis and Cizeron took a more cerebral path for their free dance which features a poem by Canadian artist Forest Blakk. His work was brought to their attention by coach Marie-France Dubreuil.

“Marie-France showed us a video,” Papadakis said. “It was a group of dancers dancing to another piece by Forest Blakk that’s called ‘Swipe Right’ and it was very different than what we are doing now, but we thought it was super cool to use a spoken word piece and just move and translate those words into movements.

“We looked into Forest Blakk’s other pieces and we found ‘Find Me’, the one we are using. To fit the rules, we had to mix it with other songs from Ólafur Arnalds. It was an interesting process because we did a lot of work off-ice with (choreographer) Sam Chouinard before putting it on the ice with Marie-France. We also took a lot of time to choose the right sentences, the right phrases to put in our programme. We wanted it to be three parts and not just a whole thing. We had to pick the lyrics. It had to have meaning too, so we read the lyrics a lot.”

For Papadakis and Cizeron, the dance is a contemplation on connection and loss. The duo endeavoured to express that in a way that was relatable to those watching and not morbid.

“It’s a poem that is a little bit abstract, but it has some images in it that are very concrete,” Cizeron said. “The way we interpret it, for us, this programme is a little bit about death, but not in a necessarily tragic way. It’s about two really connected souls who want to find each other after life, after whatever they are going through. I think in this way that connects to everyone because everyone will die. The poem is trying to look at it in a more hopeful way.”

While lyrics have been permitted to different degrees in ice dance over the past two decades, the concept of primarily basing a programme on and coordinating movement to a spoken word piece is a novelty.

“We knew it was different and that probably a lot of people would think it was weird to not skate to music rather than just words, but it was also what was exciting,” Papadakis said. “We always try and do stuff that nobody has done before. It was more exciting than it was anything else.”

“If it wasn’t for the rules, we would probably have just skated to the original piece,” Cizeron said. “But that’s what it is and we kind liked the idea of working with chapters. It’s a group of phrases and the next piece of music interprets what was just said.”

“It was more interesting and fun to do than it was challenging,” Papadakis said. “The only challenge honestly was it was hard to make it so that it fitted the rules. It was a lot of thinking, a lot about finding music. That was the hardest part, but concerning how it is to skate to words and to make choreography, it was what we wanted to do and we were pumped about this idea.

“We are very happy about how it turned out. It’s a programme that is very dear to us.”

The French earned a score of 133.55 for their free in Grenoble and coasted to victory for the fourth consecutive year. There was a sense of relief for them at having gotten their first international event of the season out of the way.

“It’s the first competition of the year really for us so we felt pretty nervous,” Cizeron said.

“We definitely feel more comfortable than before the competition, but it’s still the beginning of the season,” Papadakis said. “It’s the same process every year.”

This week their focus turns to the NHK Trophy in Sapporo, Japan for the second Grand Prix assignment and a chance to build on their performances in Grenoble.

“We are looking forward to Japan to work on all the things that didn’t quite work the way we wanted it to and just make it even better there,” Papadakis said. 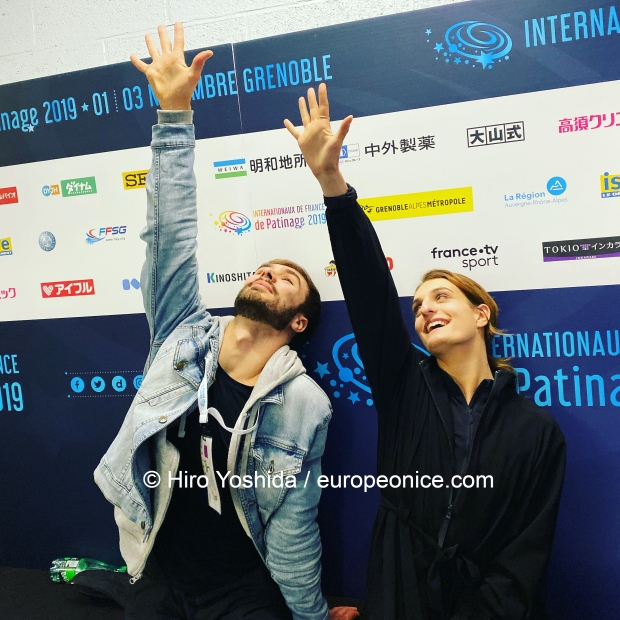 After starting at home in France, they will be concluding their season next March at the World Championships in Montreal, Canada, their other home for the past five years.

“We are definitely excited to be competing there,” Papadakis said. “It will be a weird feeling too because we have been training in Montreal for more than five years, but we’ve never done any shows or competitions. We just train there.

“From my apartment, it’s fifteen minutes walking from Centre Bell where the competition is going to be. I can see it through my window. It’s going to be funny.”

For now, there is the serious business of preparing to retain their European and World titles and polishing their routines over the coming months.

“Of course, we want to fight to keep our European and World titles,” Papadakis said. “Otherwise it is to make the two programmes we have grow, and improve on them and as usual get better and better at every competition.”