By Miwako Nagata
It has been more than eight months since 2017 United States national junior champion Aleksei Krasnozhon (18) withdrew from the 2018 ISU World Junior Figure Skating Championships in Sofia, Bulgaria last March due to a sprain in his right ankle. A fall on a quadruple Salchow, the first jump in his free skate, prevented him from continuing despite having a strong shot to take the World Junior title as he held a comfortable lead after the short programme.

After rehabilitating, Krasnozhon started the following international season at the Nebelhorn Trophy in Oberstdorf, Germany in September 2018. He then made his senior Grand Prix debut in Helsinki, Finland.
“Competing for the first time at a senior Grand Prix felt really good. I am very thankful that I got to compete with skaters such as Yuzuru Hanyu. Obviously, there is a big difference competing at a Junior Grand Prix and a senior Grand Prix. During a JGP everyone is tense, and trying to prove something to each other, while at a Senior GP everyone is calm and respectful.”
Krasnozhon, born in Saint Petersburg, competed for Russia until December 2013. In March 2014, he moved to the U.S. with the aim of representing the country and to be coached by Peter Cain and Darlene Cain in Euless, Texas. His application for U.S. citizenship, made in March 2018, is currently being processed.
“My move to the U.S. was kind of spontaneous. As you know, skating in Russia is very competitive now. Back in my younger days, we had so many boys that it was so hard to get noticed and it was near impossible once you fell behind. It’s kind of hard to go forward. And you can see that most Russian skaters that come forward now are in their twenties. I am 18, and my parents don’t want me to be slopping around for two years. A lot of skaters either quit or lose motivation or interest in skating. That’s why my parents wanted me to have an opportunity to study in the United States. That was what made the move possible. They wanted me to study and they wanted me to skate and see how it goes.”
Krasnozhon started skating at the age of six. He saw Evgeni Plushenko at the Olympics in Torino, Italy in 2006 and told his parents that he wanted to be like him. His parents took him skating and he became a student of Alexei Mishin, his wife Tatiana Mishina and their assistant coach Oleg Tataurov. 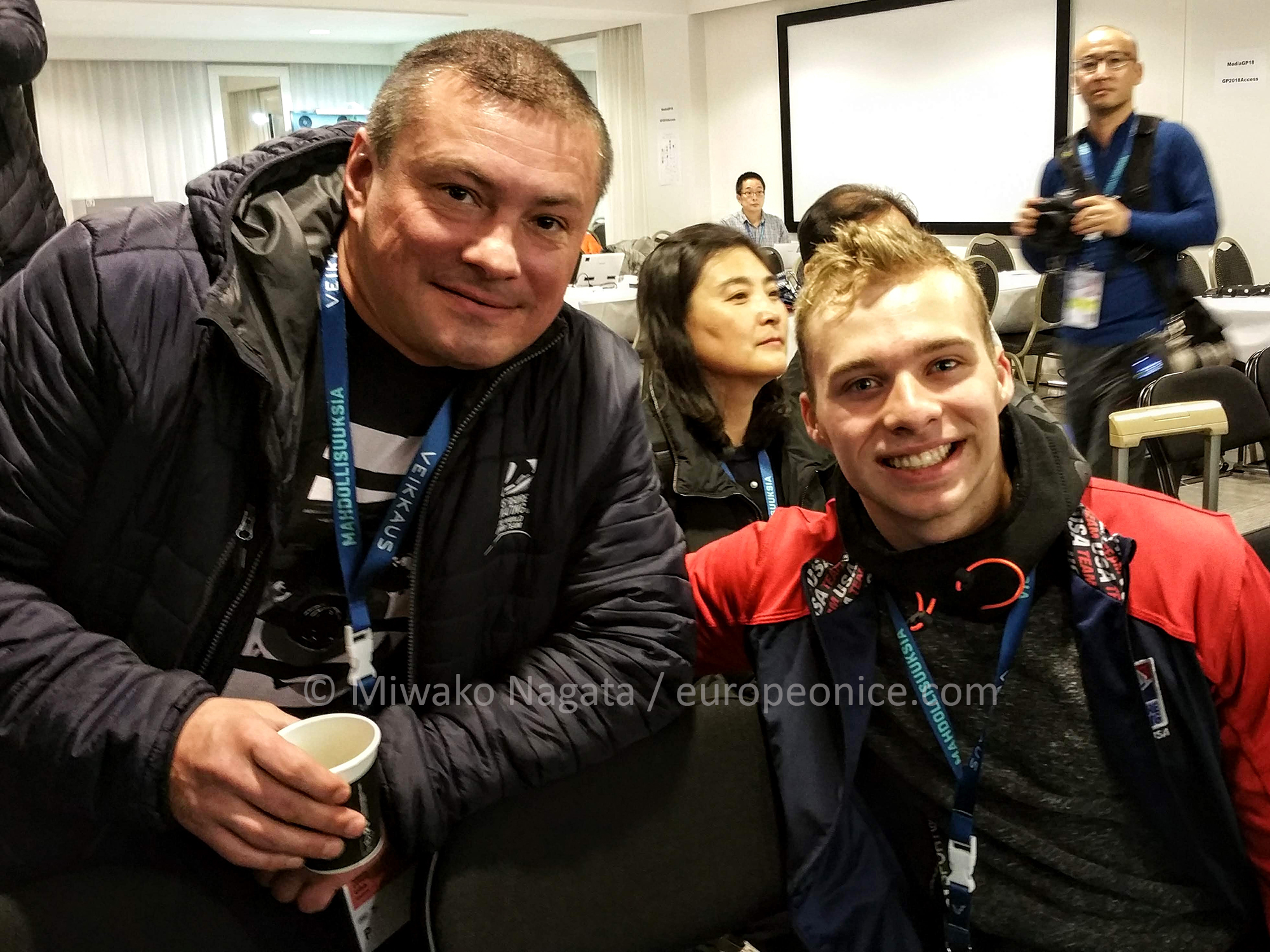 In April 2018, after four years training with the Cains in the U.S., Krasnozhon made another major coaching change to Russian coaches Olga Ganicheva and Alexei Letov. He is now training at the Dr. Pepper Star Center in Plano, Texas.
“I think that I learned a lot from Peter and Darlene as far as overall skating goes, but now Russians are really good at teaching jumps. And that’s what I needed, and I decided that since I hurt myself – the biggest injury was from the quad – I felt like I needed help with my jumps, so I wanted to learn from somebody who I think could teach me this. I think that with Peter and Darlene I kind of felt I wasn’t listening to them. To me it was all new when I switched to Alexei. I knew the Russian way and I knew how to do what he was talking about. For me it was easier to do what he says. While with Peter and Darlene, I had a hard time trusting them which was kind of on my side so that’s why I switched because I felt like I couldn’t make myself listen to them.”

It has been said that U.S. skaters do more run throughs compared to Russian skaters. Krasnozhon explains how the trend has changed.
“I think nowadays, if you look at the practices, when it comes to the top everyone runs their programme. They put run throughs into their training. Not only do you run your programmes, you also do the part after the programme and the programme run through shouldn’t be something hard anyway. It’s kind of a part of your training, but it is probably 20 percent of what you are supposed to accomplish in a day.”
Krasnozhon was the first skater to land a quadruple loop in competition (at a JGP in Ljubljana, Slovenia in 2016), but, even though it was fully rotated, it was not ratified by the International Skating Union because he stepped out on the landing. This season he is working on another quad jump rather than the loop with his future career in mind.
“As for the loop, I hurt my right foot, so I brooded so much that it was hard to do the jump. I am much more comfortable with the Salchow now and that’s something that is coming very soon and something that is happening for me.
“For me the loop is kind of like – once I know that my ankle is able to take that jump, I’ll go for it but right now this is the first season after the Olympics so I think that for me to make my career to last longer, I have to restrict myself as far as the quad loop and quad flip goes.
If I start doing them now, I will make my foot worse and that will hurt me in the long term and, if I start working on Salchow and start make it consistent, I think that will help me in the long term do actual valid quads.”
Krasnozhon’s planned content for the GP in Helsinki, Finland included one quad Salchow in each programme but before the competition he and his coach made the decision not to do the jump in both programmes and it turned out well for him. Krasnozhon skated two nearly clean programmes and his solid free skate scored 136.98, which is his personal best under the new judging system. In this interview after the official practice on the day before the short programme, Krasnozhon was still deciding his programme for the upcoming competition.
“Right now, we’re going to decide to see if we’re going to do the quad salchow in the short depending on how my practice goes tomorrow morning. Because with the new (judging) system, it is better to skate clean. But if you don’t rotate quads fully you put all that energy in and you get nothing. It’s risky. You have to be able to do quads perfectly clean. So, I think the biggest deal is to decide tomorrow depending on my condition.”
The injury he got during the free skate at Junior Worlds was diagnosed as a grade 2 sprain of all three major ligaments in his right ankle and he undertook an intensive physical therapy programme. It took four months for him to get back on the ice.
“I had a tough injury in my back when I was 12, but the back kind of heals faster and it wasn’t as needy as my injury right now because with this they said that the pain and discomfort will not go away for about one year. So, it’s like a little baby that I always have to carry this whole season. I don’t know if you noticed, but after every practice I have to go to physical therapy and they have to work on it and mobilise it. And it is just annoying. It is definitely an experience that I don’t wish anybody to have but it’s something that I guess I have to go through.”
Krasnozhon kept himself in a positive frame of mind during his rehabilitation despite the hard time he went through. He says that it was ultimately good that he had the injury and it made him stronger.
“For me it was a really good chance to look at my skating and think, ‘Now I have to do those things. They can make me better.’. Like recover faster and stuff like that. I think that skating for me means a lot. It really became my whole life.
“My parents never thought that skating would become a big part of their lives. But it did, and they really, really support it. And my parents want to see me do well, and obviously for everybody that is hard. But they are looking at it long-term. They are no longer like, ‘This is the season.’ They know that skating takes so much. When I first became a junior, they saw that with skating you have to take steps, but you can’t if you take too big of a step. Then you are going to fall back – more steps down. In skating you take one step at a time – one step up or you don’t take any steps.”

Krasnozhon is now preparing for the U.S. championships in Detroit, Michigan this month and internationally he has set another goal too – a place at the 2022 Olympics in Beijing, China. No one knows how many men’s spots the U.S. Olympic team will have in three years’ time but Krasnozhon believes that he has a chance.
“I do want to do Junior Worlds and I want to compete at Four Continents as well. I think that, if I get myself right and ready for nationals, I can really be in the top four there.
“I absolutely want to make an Olympic team. Internationally I have some places to make up. I think that now there are a lot of strong competitors that I’m not ready to compete with yet but it’s good for me to go out there and take on the whole world. You’re going to have some who are better and much stronger than I am.
“You take the U.S. I don’t think I can compete with Nathan Chen. I cannot compete with Vincent Zhou. Not yet. But I can compete with other guys. Third and fourth places are open for me, so I think that if I make certain things better and start landing quads, that will be the key for me.”
Krasnozhon lived with his former coach Peter and Darlene Cain at their house for several years and moved to his own apartment when he changed coaches in April 2018. This made him more responsible as an adult.
“When I lived with Peter and Darlene, they kind of controlled me, and that was good for me. Then when I got on my own, I got a little bit too crazy, going to sleep too late or watching TV too long. I had to tell myself, ‘Ok, Alex we’ve got to shape up.’ The Cains were like my parents in the U.S. before, so now that I am on my own, I had to really take care to control my life myself. So far it has worked out well for me.”

Since he left the Cains, Krasnozhon has no skater who trains at the same level as he does at his current rink, but it does not seem to matter much to him. He keeps a good relationship with his former training mates and fellow skaters with whom he competed in junior events.
“I keep in contact with everyone, especially Jimmy (Ma) and Timothy (Dolensky). A lot of the time we get together and do something fun on weekends. Every now and then Timothy comes and skates at my rink, and occasionally Jimmy comes and skates. I keep in touch with Andrew (Torgashev) and Camden (Pulkinen) too. We are all friends. At my rink there are no skaters that compete at the same level as I do, but I keep myself motivated by setting personal goals for every day, every week, and every month.”