Costume malfunctions aside, Gabriella Papadakis and Guillaume Cizeron enjoyed another successful season pushing themselves to new highs. Reflecting on the past year, the French ice dancers are proud of how far they have come and are already looking ahead to the future.

Although they lost to Tessa Virtue and Scott Moir at the 2017 World Figure Skating Championships in Helsinki, Finland, they finished ahead of the Canadians at their only pre-Olympic match-up at the Grand Prix Final in Nagoya, Japan. They also set a new world record total score of 202.16 in the process.

Papadakis and Cizeron backed that up the following month at the European Figure Skating Championships in Moscow, Russia where they claimed their fourth straight title. They became the first ice dance team since Marina Klimova and Sergei Ponomarenko in 1992 to achieve this feat. They also set two new world records at Europeans in the free dance (121.87) and overall (203.16). The signs for the Olympics the following month looked very encouraging.

They made the strategic decision to not participate in the team event and arrived closer to the date of the ice dance competition. As they had just missed out on representing France in Sochi 2014, this was their first Olympic experience and it was somewhat different to what they had expected although this was not a surprise for them.

“I think it seems much bigger than it is due to the media and the impact it has on the world,” Papadakis said. “When you’re inside it, it’s much smaller, but in a nice way though. You are much closer to other athletes. There’s more fun and energy and not as stressful as we imagined.”

“There was no huge shock,” Cizeron added. “I think we knew that whatever we could imagine it was not going to be like that. We expected a discovery and that’s what we got.

“I feel like I was surprised about the whole overall feeling. It didn’t feel as stressful as I thought it would be. It was a bit more relaxed because there’s so many athletes and the focus isn’t just on skating so you really feel like you are a part of a bigger thing.”

As the whole world already knows, mere seconds into their Olympic debut in the short dance in PyeongChang, the clasp holding Papadakis’s dress came undone and the incident clearly knocked them off their stride and put them into second place behind their Canadian rivals. Nevertheless, they came back strong the following day in the free to set another world record with a score of 123.35. They also set a world record total score of 205.28, but this was broken minutes later by Virtue and Moir who went on to win gold. Despite things not going according to plan, the French feel satisfied with how they performed given what happened.

“We did the best that we could possibly do considering the circumstances and we were proud of that,” Cizeron said. “The whole Olympic experience was of course different from what we could have expected. Some people get medals, a lot of people don’t. Some people get injured, some people have bad luck.”

There had been some criticism regarding their late arrival to the Games and that skating in the team event would have meant that they would have discovered the issue with the short dance dress earlier. However, both skaters are convinced they made the right choice to delay going to Korea.

“I think we made this decision because we didn’t really have a camp after the team event and we really couldn’t imagine not training for that much time,” Papadakis said. “It was also so far from what we already knew, and what we were used to, so we really wanted to stick to as much as we could something we felt comfortable in. I mean it worked! We felt great and if it wasn’t for the dress we would have skated well. I think we really didn’t doubt that.”

“It would have been nice to do the opening ceremony, but in the end, we don’t regret anything because it was so cold that the French (skating) team didn’t go to the opening ceremony in order to not get sick,” Cizeron explained. “I have the feeling that we didn’t miss out on anything. Of course, it would have been nice to have been part of the event with our team and contribute to the competition, but we will have another occasion to do so.”

Initially, there was the sting of sadness at not having skated their absolute best and winning gold, but on reflection and with a little bit of time and distance they began to realise the scale of what they had accomplished. 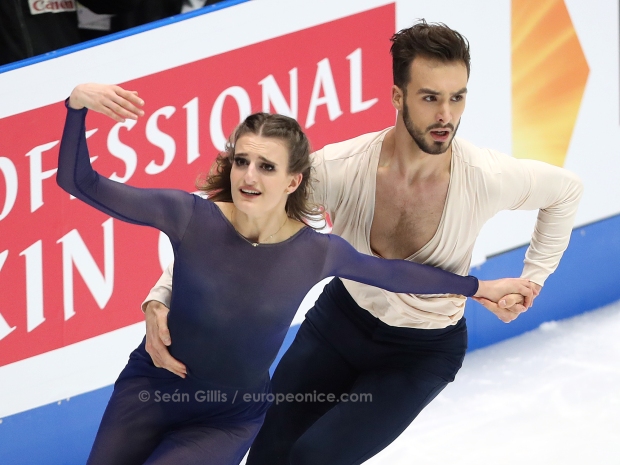 “At that moment, it was disappointment because we really wanted to get the gold but looking back a silver medal is already a great achievement for us,” Papadakis said. “I don’t think five years ago we would have believed that would happen. We’re just very happy with our medal, but also the way we got there too.”

“Sometimes you have bad luck and stuff happens,” Cizeron added. “It’s always the same process when something like that happens. You’re sad and angry. You always go through a lot of emotions, but in the end, you can’t change what happened. The only thing you can do is look at the future and just do the best that you can.”

The increased outside attention around the Olympics brought it home even more the special relationship the duo enjoys with their coaching team, family and rivals.

“I think it’s nice to feel like you are not alone, like you have a team with whom you are so well surrounded as we are with our team of coaches,” Cizeron said. “Our parents were there as well, so we felt supported. In these moments you realise that you have people who care about you and that you are not alone. As a team even with our teammates it’s always been nice to be surrounded with friends and human connections. It’s easy to get caught in the stories and in the media stuff, all the things people say about you. It’s just to realise that you have people to lean on.

“It’s like in life,” Papadakis added. “There are some people you get on with better than others for no reasons. For example, Maddie (Chock) and Evan (Bates), Maddie (Hubbell) and Zach (Donohue), those are couples that we know for a very long time. I’m saying them, but also a lot of others. Anna (Cappellini) and Luca (Lanotte) for example, we know them very well. You know that you are all in the same boat and you have so many more memories than just those of competitions. You rely on that more in your interactions than the rivalry.”

With the Olympics over, their minds turned to preparing for this year’s World Figure Skating Championships in Milan, Italy. Just five years ago, they had come to the same city to take part in the 2013 World Junior Figure Skating Championships where they captured a silver medal. In the ensuing period, they have collected title after title to now rank among the best teams in the world. It is beyond what either of them could have dreamed of back in 2013.
“I don’t think we had much vision at the time,” Papadakis said. “I feel that when we were young we were taking each year as it came.”

“We really were going day by day,” Cizeron concurred. “We’ve come a long way in a really short period of time. I think we got lucky to find a skating family that we feel comfortable in and that allows us to grow and to push ourselves. Five years ago, I don’t think I would ever have imagined being here or competing against Tessa and Scott as equals. Just the fact that we’ve improved that much to be able to compete against them is already a great achievement I think.”

Even if the Canadians had showed up to the World Championships last month, they may have found the French difficult to beat. Papadakis and Cizeron started off their bid for a third World title with a new world record score of 83.73 in the short dance. They broke the world record for the free dance for the fifth time this season with a score of 123.47 and perfect 10s for the Performance, Composition and Interpretation of the Music/Timing programme components. Their overall competition score of 207.20 was their sixth combined total world record of the season and they ended up more than ten points ahead of the rest of the field.

“When the season has been so demanding, it felt really good to have that support and it just lifted us up,” Cizeron said. “It feels good to end the season on a note like this.” 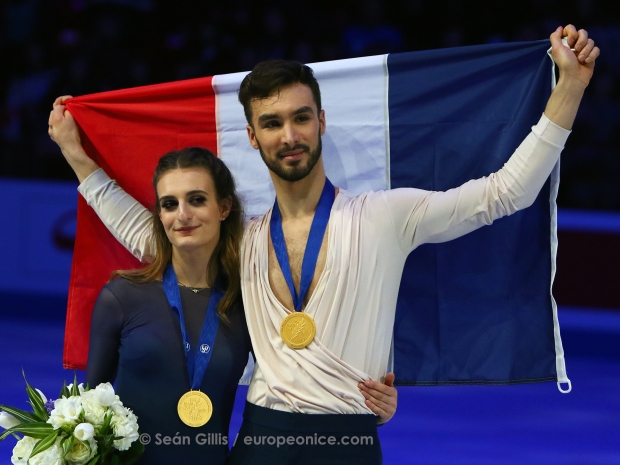 Worlds was their final competition of the season and they will begin the process of preparing for next season in a few weeks’ time. However, they are not quite ready to let go of the programmes they have had so much success with just yet, in particular their “Moonlight Sonata” free dance.

““It wasn’t easy to work on and build on it, but it was something we were really motivated for,” Papadakis said.

“We may do it for an exhibition. We love this programme and we will miss it. We want to skate it again.”

“We will probably end up skating to classical music again in the future,” Cizeron said. “Which one we don’t know.”

The team do not have any firm ideas for programmes for the coming season, although they will be required to come up with a tango for the short. For their free, they have some ideas about what kind of instruments they would like to skate to rather than any firm ideas about particular pieces of music.

“I’m not super knowledgeable, but I love cello and piano,” Cizeron said. “I think we have been using a lot of piano lately and it might be good to try cello or guitar.”

“I really like cello too,” Papadakis continued. “Piano is what worked for us a lot and something we really enjoyed skating to. Every time we try music with cello or listen to cello it has this sensual quality that piano doesn’t. We will see if we can do something with it that would be interesting.”

The French stand in a very different position at the dawn of the Olympic cycle leading up to Beijing 2022 than they did at the start of the last one four years ago. They are ready to continue their journey and to take on any challenges they may face.

“I think there is always room for us to grow and also there are rule changes from next year,” Papadakis said. “We won’t get bored. There are always things to improve on.

“I think the first year of an Olympic cycle is always very unpredictable, but for sure we’ll always keep trying to be the best we can be and the best in the world if we can.”