After five previous stops through Russia, Canada, China, Japan and France, the ISU Grand Prix of Figure Skating  reached its final stop in Lake Placid, United States where the remaining qualifiers for the Grand Prix Final in Nagoya, Japan were decided.

Nathan Chen provided the hosts with their first victory this weekend when he struck gold in the men’s event. After setting a new personal best of 104.12 in the short programme, the U.S. champion struggled in the free skating. He fell on a quadruple flip and a quadruple toe loop and doubled two Salchows and a toe loop, as well as singling an Axel. He had enough in hand to seal gold and advances to the Grand Prix Final as the only male skater with two wins from his assignments.

Chen will be joined in Nagoya by fellow American Adam Rippon who finished second in Lake Placid. The 2016 U.S. champion also set a new personal best of 89.04 in the short and finished first in the free despite falling on a downgraded quadruple Lutz and dislocating his right shoulder in the process.

Sergei Voronov performed solidly in both segments of the competition to earn bronze and also secure himself a spot in the Grand Prix Final. By finishing fourth, Boyang Jin became the final man to punch his ticket for Nagoya next month.

Japan dominated the ladies event with Satoko Miyahara proving that she is on the comeback trail. The only significant error the 2015 World silver medallist made over the course of the two days was when she stepped out of a triple Lutz-triple toe loop at the beginning of her short on Saturday. This was Miyahara’s first Grand Prix title since the 2015 NHK Trophy.

Kaori Sakamoto picked up the silver medal and a whole new set of personal bests (69.40/141.19/210.59) along the way. This was the first time on a Senior Grand Prix podium for the 2016 Junior Grand Prix Final bronze medallist.

America’s Bradie Tennell bagged bronze by moving up from fourth after the short with a personal best free score of 137.09. None of the women competing in Lake Placid qualified for the Grand Prix Final.

Aljona Savchenko and Bruno Massot put their triple Axel throw on hold this weekend, but were still able to come away with a win. Massot fell on a triple Salchow in the short which had the Germans in third going into the free. An almost flawless performance in the free and a new personal best of 150.58 saw them leap to the top of the standings and win pairs gold.

Xiaoyu Yu and Hao Zhang also scored a personal best in the free (145.53) and maintained their second place from the short. A fall by Meagan Duhamel on a triple Lutz in the free pushed her and partner Eric Radford down from first overnight to third overall. All three pairs will face each other once more at the Grand Prix Final. 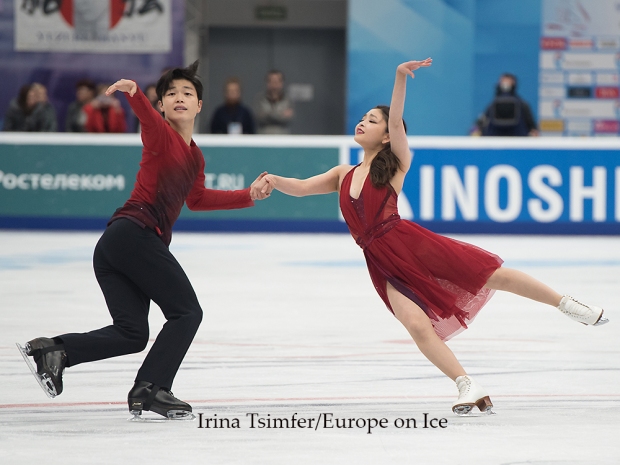 There was no doubt that Maia Shibutani and Alex Shibutani were the class of the ice dance event. The reigning World bronze medallists notched up personal bests in the short dance (79.18) and total score (194.25) on the way to winning their second Grand Prix of the season.

Anna Cappellini and Luca Lanotte needed to finish second in Lake Placid and score 181.03 overall to qualify for the Grand Prix Final. The 2014 World champions managed to do it by the slimmest of margins with a total of 181.63.

The bronze went to Victoria Sinitsina and Nikita Katsalapov who stood on a Grand Prix podium for the first time since the Rostelecom Cup in 2015. Their free dance score of 107.81 was a personal best.