Just under 50 years after the 1968 Winter Olympic Games, world class figure skating returned to the city of Grenoble as it hosted the Internationaux de France de Patinage 2017, the fifth stop on the ISU Grand Prix of Figure Skating.

After a poor performance due to illness at Cup of China two weeks ago, Javier Fernandez bounced back with a second French Grand Prix title in a row and seventh Grand Prix victory of his career. The two-time World champion stamped his authority on the event when he produced a 107.86 score in the short programme to lead by just under 14 points at the halfway stage. Things didn’t go as smoothly in the free skating where he fell on a quadruple Salchow and a triple Axel in “Man from La Mancha” routine. Despite finishing second in the segment, his buffer from the short was more than enough to see him seal the victory.

Japan’s Shoma Uno had been favoured marginally to win the title, but he fell on a quadruple flip in the short that left him well behind Fernandez. Although he won the free, he also fell twice during his “Turandot” programme and had to settle for second overall. His silver medal saw him book his place at the Grand Prix Final which will be held in his hometown of Nagoya.

There was delight for fans of Misha Ge as he won bronze after a flawless free that saw him move up sixth after the short. The skater from Uzbekistan was not even certain he would be in Grenoble as he only received his French visa four hours before his flight. This was Ge’s first Grand Prix podium finish and the first for any skater from his country since 2001. 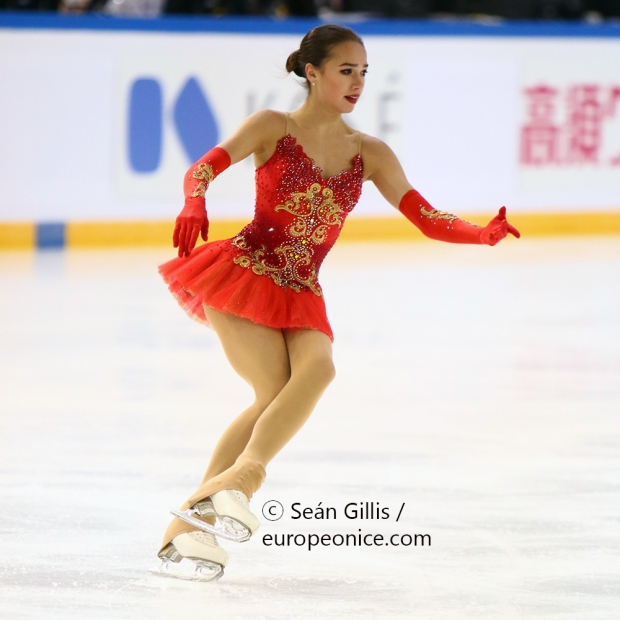 Alina Zagitova had a rocky start to her competition in France. The reigning Junior World champion was lying in fifth place after the short due to errors on a triple Lutz and triple flip-triple loop combination. The following day she was a different skater and racked up a score of 151.34 in the free, a new personal best and the second highest for any female skater under the current judging system. Coupled with her victory in China, she also guaranteed herself a spot in the Grand Prix Final.

Maria Sotskova picked up the silver medal by virtue of a clean skater herself in the free. She posted new personal bests of 140.99 and 208.78 for her free and total respectively and will also advance to the Grand Prix Final. Joining the Russian teenagers will be Kaetlyn Osmond. The Canadian dropped from first after the short in France, but managed a bronze which will enable her to travel to Japan next month.

Evgenia Tarasova and Vladimir Morozov upgraded their silver from last season to capture the pairs title this weekend. The European champions struggled somewhat in the free with Tarasova singling a triple toe loop and double footed a triple loop throw. With two wins from their assignments, they have qualified for the Grand Prix Final.

Vanessa James and Morgan Cipres beat the Russians in the free, but had too much of a deficit after the short to make up the ground lost. Their second place in Grenoble gives them a good shot at making the Grand Prix Final, although they will have to wait until after Skate America to find out. By coming third, Nicole Della Monica and Matteo Guarise won their first Grand Prix medal.

The highlight of the competition for the local audience was without the ice dance event and Gabriella Papadakis and Guillaume Cizeron did not disappoint. The two-time World champions smashed their personal best in the short dance with a score of 81.40 and then went on to set world records for their free dance (120.58) and total (201.98) just two weeks after they had previously done at Cup of China. Remarkably, they also received a perfect 10.00 score for interpretation of the music and timing. The French now stand top of the Grand Prix Final standings.

Madison Chock and Evan Bates were a somewhat distant second over 20 points behind the French. The Americans will also be making the journey to Nagoya next month. Alexandra Stepanova and Ivan Bukin repeated their bronze medal from Rostelecom Cup with another one in Grenoble.