After an absence of two years, Canada’s Julianne Séguin and Charlie Bilodeau will once again be competing at a World Championships when they take to the ice in the pairs event this week in Helsinki, Finland.

After making their debut at the championships in 2015, they were prevented from skating at 2016 Worlds when Séguin sustained an ankle injury in February of last year that side lined her for a number of months. While the Canadians were frustrated at having to withdraw, they are still able to see the silver lining in what happened.

“We had the chance to work on things we never had the time to work on when you are competing, like he was going to the gym half the time and half the time he was skating,” Séguin said. “He was able to gain some muscles and strength and for me it was my flexibility that I really worked on. I think it was supposed to be like that if we wanted to continue after that and get better and stronger.”

Apart from having to withdraw from Worlds, the only other negative for them was their preparations for this season got delayed and they were unable to acquire any new elements as Séguin’s recovery took longer than expected.

“That time where we were supposed to try new stuff as a pair team we were just getting back stuff that we had,” Bilodeau said. “On the ice, we were not able to work on anything new. For me it was just my singles, for her flexibility. Maybe this year we came with the same sort of elements as last year, but I guess next year once the off-season will come we’ll have time to work more pairs elements.”

“We had to go gradually because even though my injury was almost healed, it was painful at the beginning,” Séguin added. “I had no strength in my leg because I was walking on one leg. It was quite hard to get back and get stronger with my left foot.”

The duo from Quebec came back to competition this season with a bang when they took the title at the Autumn Classic International in Montreal and earned a whole new set of personal bests in the process.

They received another confidence boost a few weeks later when they rallied from third place after the short programme to take their first Grand Prix title at Skate America in Chicago, Illinois.

However, two weeks later there was disappointment when the Canadians could only place fifth at Rostelecom Cup in Moscow, Russia. They nevertheless managed to advance to the Grand Prix Final by virtue of their victory at Skate America. 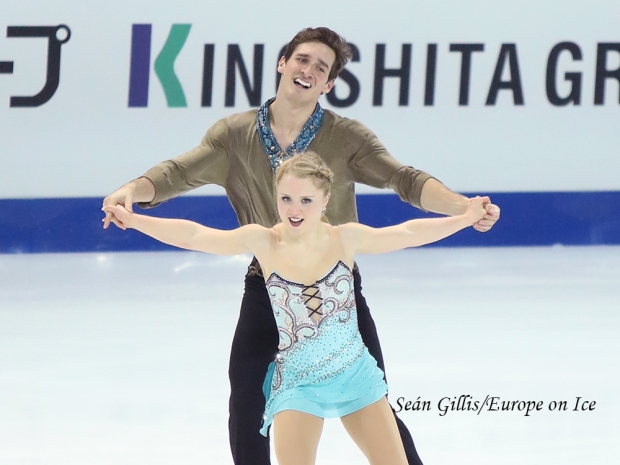 A Change of Routine

Two weeks before they arrived in Marseille, France they took the decision to change the music for their short. They initially had chosen “Skokiaan” by Louis Armstrong, but felt that the music was not working for them so they revived their “Monde Inverse” programme from last season.

“The other one was a good programme,” Séguin said. “It was just at the beginning when we did this programme it was looser and more us. Then we tried to add some new stuff and we started to become really stiff. Finally, two weeks ago we decided it was not us and we had to change something.”

With little time left until the Grand Prix Final, they performed their previous short at a practice session and immediately felt that everything clicked.

“We haven’t made any big change from last year in the programme,” Bilodeau said. “When we tried it the first time at home, we knew that it was good. Even if it wasn’t sure that we would change, we just tried it with the music at home and everything was back! When we get that feeling that is what we want. The decision was clear.”

Even though two falls in their short in France had them down in sixth place going into the free, the Canadians believe that they made the right choice to switch programmes.

“The elements were not there yet, but in general just the feeling, how we skate together and what we feel in that programme is completely different and what we like about skating,” Bilodeau said. “We made some mistakes, but we are sure with some more weeks of work on that short programme it will be a better competition for us.”

Seguin and Bilodeau had a much better time in the free skating. They finished fourth in the segment to move up to fifth overall.

“It’s going to be up and down sometimes,” Séguin said. “I think just to be back in the long programme with good feelings and great elements is really a good thing for us.”

This season they are skating to the “Cinema Paradiso” film soundtrack for their free routine. The choice of using a female vocal version within the programme was deliberate.

“The last two years our long programmes were with the lyrics of a man, a rocker,” Bilodeau said. “We wanted to put Julianne more in front.”

After competing in Marseille in December, they returned home to begin their preparations for the Canadian Figure Skating Championships. However, on Christmas Eve disaster struck when Séguin suffered a concussion. It forced the pair to withdraw from Canadians, but they were named to the team for Worlds by Skate Canada. They resumed training on February 1st. They have also been keeping a close eye on what their competitors did at Europeans and Four Continents.

“We can see improvement for a lot of teams and we always get inspired by their performances,” Séguin said. “It’s also motivating us to push ourselves.”

Although they are based at a different rink and are in a different discipline, Séguin and Bilodeau have also been inspired by the burgeoning concentration of the best ice dance teams in the world locating to Montreal. Marie-France Dubreuil is also an integral part of their coaching team and works in tandem with their main coach Josée Picard.

“I think Marie-France brings us a different energy even when we are practicing,” Séguin said. “Josée brings us the sparkling and explosion and Marie-France is more confident. Both are such a great team. I think it’s really nice to have both of them at a competition.”

“Around once a week we go and skate at her rink with all the dance teams,” Bilodeau said. “It’s really nice to work there. Where we train every day, there are not so many people. We are kind of alone in our category.

“To have grown people to work with, even if it’s not the same discipline as us, really brings an energy. You can see once you step in the rink that there’s something happening and everyone are cheering for each other.”

Despite the isolation that they sometimes feel at their home rink, Séguin and Bilodeau also believe that it has also enabled them to strengthen the bonds between them and be there for one another.

“The fact that we are alone at our rink and that there’s not so many skaters we got the opportunity to really talk together and get to know each other,” Séguin said.

The majority of the spots for the 2018 Olympics will be decided this week at Helsinki Worlds, but the Canadians are trying not to look too far ahead. Ultimately, the only thing within their control is how well they skate with everything else being outside of their hands.

“If we think about any position or any points, it’s not working for us,” Séguin said.

“Results come when we do our jobs,” Bilodeau concurred. “Logically, one comes with the other.”

For now, the 2015 World Junior silver medallists are just enjoying being injury-free and competing against the best skaters in the world once more.

“It’s a great opportunity and a good challenge for us because last year we were not able to make it to Worlds,” Séguin said.

Just two seasons out of the junior ranks and still in their early twenties, the Montreal pair look set to become a force to be reckoned with following the PyeongChang Olympics. With a long career ahead of them, they are focusing for now on taking in what they can from their peers and making it their own.

“The comment that we receive is that we are a fresh couple,” Séguin said. “We’ve got good energy. We’ve got good chemistry and I think maybe that’s what makes us go to the top.”

“Everyone has their own style and their own quality,” Bilodeau continued. “I think it’s the way we work just trying to be the more complete skaters. We have to try to take a bit of everyone to put that in our own skating to be able to deliver something that in all the aspects is magical.”