With their victory at the 2016 World Junior Figure Skating Championships in Debrecen, Hungary, Anna Duskova and Martin Bidar announced themselves as the future of Czech figure skating.
This week sees the pair make their senior championships debut as they represent their country at the European Figure Skating Championships at home in Ostrava. In fact, this will be only the second senior competition for Duskova and Bidar who obtained their qualifying scores for Europeans when they won the Coupe de Nice in October. They have continued to compete as juniors this season as well and it has proved to be a challenging transition at times.
“It’s difficult to transfer from junior to senior in one or two months,” Duskova said. “In the free programme, there are three lifts, one more than junior. We have to practice the third lift often.
“We wanted to do the seniors mainly because the European Championships are in Ostrava and then at Worlds there are the nominations for the Olympics. We also wanted to do the Junior Grand Prix competitions because that was the only title we were missing. I don’t know if we could get to the final in seniors.”

The Czechs began their season at their home Junior Grand Prix in Ostrava which they won. It was their first Junior Grand Prix title. Their second-place finish at their second assignment in Dresden, Germany a month later punched their tickets to the Junior Grand Prix Final in Marseille, France in December. They ended up second there for the second consecutive year.
“We are enjoying that we can be here and see all the wonderful skaters,” Duskova said. “Competition on this level is a dream come true. Not everyone can get here.”
They will go into Europeans with very little expectations on their shoulders and they are looking forward to the experience.
“I think we are more excited than under the pressure because I think we will enjoy this competition,” Duskova said. “The crowd will be Czech and they will support us. I think it will be a great competition.”
Duskova began skating at the age six, while Bidar took to the ice for the first time when he was four. He also has an older brother, Petr, who represented the Czech Republic internationally. Born ten months apart from each other in 1999, Duskova and Bidar teamed up when they were 11.
“I think in the Czech Republic there is no better girl than Anna,” Bidar said.
“There are not many boys to choose from, but Martin is also the best,” Duskova agreed. “I think we are good friends. We don’t argue that much.”
The pair were put together by Eva Horklova who has been their primary coach to this day. They have also been spending an increasing amount of time in Montreal, Canada with renowned pairs coach Richard Gauthier and their work with him has given them the confidence to progress technically.
“We learned triple twist there,” Duskova said. “We were really afraid to do it. Our coach Eva was also quite afraid that we would hurt ourselves. Richard gave us that power to do it.
“We are more confident because in Montreal there are many pairs, I think about eight or ten, so we saw how they are doing it.”
They enjoy the positive mood of the training environment even though it can be testing to be far away from family for extended periods of time.
“I really like the people,” Bidar said. “They are just a little bit different than in the Czech Republic, so it’s great.”
“Everybody there is friendly,” Duskova continued. “Not that people in the Czech Republic are not friendly, but it’s different because European culture is different than American or Canadian.
“I miss my family because I can’t be with them that often because of school and practices. When I’m in Canada, I miss them very much.”

Both skaters also competed in singles up until last season. In fact, Duskova represented her country in both singles and pairs at 2014 Junior Worlds in Sofia, Bulgaria. While Bidar is now focused solely on pairs, Duskova entered Lombardia Trophy in Bergamo, Italy in September where she ended up 19th. She sees her future in pairs though.
“I think together we can do more than in singles because I’m not that good a jumper. I can’t do those jumps like the Russian girls, so I think I can’t get to this level in singles.”
With the technical content in pairs constantly progressing as well with quadruple throws and twists, the Junior World champions know that they will have to raise the bar eventually, but for the moment they are building a solid foundation.
“We have never tried,” Duskova replied when asked about putting a quad in their free programme. “We will see how it goes. You have to do the triples right so you can work on the quads.”
Training with world champions Meagan Duhamel and Eric Radford and other elite skaters in Montreal means that the Czechs have no shortage of top class pairs to whom they can aspire. They also admire Olympic champions Tatiana Volosozhar and Maxim Trankov.

Underlining their youth, the Sochi Olympics was the first one that they followed avidly.
“They were so beautiful on the ice and those elements were amazing,” Duskova said of the Russians. “I watched the Olympics before, but I really didn’t pay attention that much because I was small. I was just watching it and didn’t know those names.”
“I watched the Olympics before in Vancouver, but I didn’t watch pairs,” Bidar added. “I really liked Evgeni Plushenko. I watched just him and that was all.” 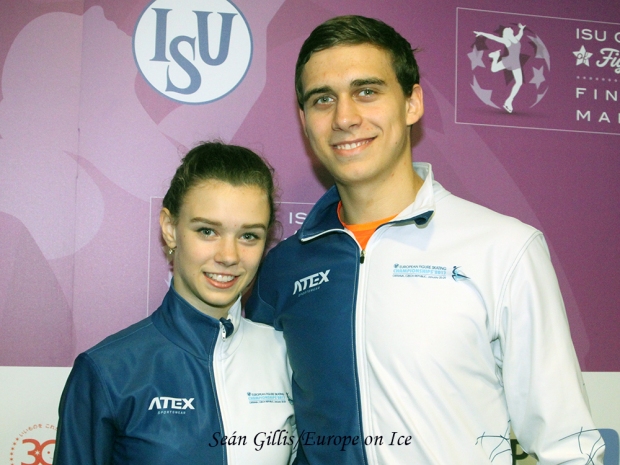 Duskova and Bidar have Olympic dreams of their own and will try to qualify a spot for the Czech Republic at this season’s World Championships in Helsinki, Finland or next season’s Nebelhorn Trophy, if necessary. They and their coach know that time is on their side and are philosophical about achieving their goal.
“Our coach is always wants to get the best from us, but she says ‘It’s just skating. Life goes on,” Duskova said. “There will be other chances if we fail.”