After knee injury and a subsequent surgery curtailed his 2014/2015 season and forced him out of both European and World Championships, Belgium’s Jorik Hendrickx has had an entirely more fulfilling 2015/2016 so far. It has been a record breaking and successful few months for the Belgian.

Hendrickx made his competitive return to the ice at the Nebelhorn Trophy at the end of September 2015 where he finished eighth. When he suffered the injury back in November 2014, he never imagined that it would take him so long to recover.

“My doctors told me I would be able to skate again at the end of January, so I thought I could make it to Worlds,” he recalled. “I was walking fine at the end of January and doing physio, but it was really at the end of February and the beginning of March before I was back on the ice. I could walk and I could skate, but it took a long time before I could jump again.

“It took quite a long time to get all my jumps back. In two or three weeks I had all the triples back, but to have them consistent with nice height and execution took a little while. With the triple Axel, we started from scratch because it was never really a good jump for me. We had a little bit of technical support from another coach. I did a lot of double Axels and the first triple Axel was at the end of June.” 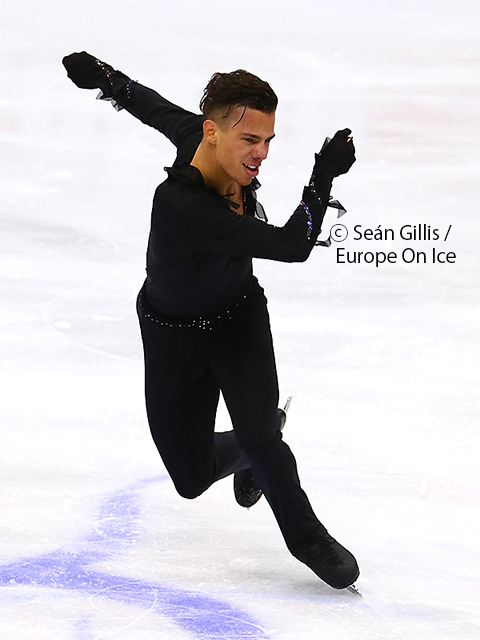 In Oberstdorf, Hendrickx unveiled two brand new programmes. His short programme is to “You Raise Me Up” by Josh Groban, while for his free skating he has chosen the “Titanic” film soundtrack composed by James Horner. The short in particular has special significance for him.

“In previous years, everyone said I’m a nice skater and this year I wanted to highlight it and I put all my emotion into my programmes. I know I will never be the best technical skater, in terms of jumps, but I think I have good skating skills and spins, so I wanted to highlight my strongest points and tried to challenge myself in those areas.

“The short I used as an exhibition. Last year I was injured and I felt a great connection with this music because it gave me this extra boost from the people who supported me. I could put my whole heart in it.

“With Titanic, I always liked the music a lot, but I thought it was bit too random to use it and maybe it wasn’t interesting enough to make a full programme. When they allowed vocal music, I wanted to use it already last year, but I thought maybe it was a bit tricky with this new concept. It’s not new anymore and I am not the only one doing it. I thought it was a great idea to integrate the movie into the music and I think it worked out quite well and people appreciate it.

“In four and a half minutes I’m trying to tell the whole story. I’m excited because I’m leaving on the ship and then I fall in love in the step sequence. It goes on and there is this drama where the ship is sinking towards the end and then I’m dead. I’m really trying to put a lot of emotions in four and a half minutes. I hope people can see the story I am trying to tell, although after the first competition I had a lot of doubts about it.”

The doubts were caused in large part by a poor performance in the free at Nebelhorn and some conflicting views about whether he had made the right choice. After some careful consideration, he decided to stick to his guns.

“I think technically I did really a bad programme. My stamina was not good enough. It was hard to do the short and the free after each other after not competing, so it was a few things that made me very tired for the free. At the end of my programme, I was struggling with double Axels. Technically it was not a good programme and then I couldn’t put my heart into it because maybe I was focusing on the jumps a little bit extra because it was not going well. The music at the end where there was screaming and people were falling out of the boat was a bit chaotic too. We had feedback that it was a bit too much drama and I should have some other jumps and maybe it can work, maybe not.

“So there was a lot of different feedback, both positive and negative. I was really doubting this programme and I thought maybe I should change and try another programme, a safer one. When I got home with my coach and choreographer, we said ‘OK maybe we should adapt the music a little bit, change it a little bit to make it not that chaotic at the end.’ We made a few adjustments and I said ‘No, I’m keeping it because I know I can perform this much better and if the jumps are there I think it can work.’ From the last two or three competitions, I think you can tell what I am trying to do and even here if the jumps were not perfect, I still kept the story and put my heart out there and interacted with the audience.”

His faith in his judgement was not unfounded and as the season progressed his results improved. He came 5th at Coupe de Nice in October 2015 and two weeks later finished 4th at Ice Challenge in Austria posting personal bests for his free and total scores. The following month he climbed to the top of the podium at the NRW Trophy in Germany besting Olympic bronze medallist Denis Ten and two-time European medallist Sergei Voronov. At the Coupe du Printemps in Luxembourg earlier this month, he beat Ten once more and also finished ahead of Japan’s Takahito Mura. However, coming into the European Championships in Slovakia in January of this year his preparation was not ideal.

“After NRW, I put myself under a little pressure because I had skated the whole season without any and then suddenly I got a really high score and beat some people who I thought I would never beat. Those weeks after NRW were also very hard because I had new skates and the position of my blade was not 100% correct. I didn’t do triple Axel for three or four weeks.”

Despite all that, his short at Europeans went exceedingly well. He landed a triple Axel, a triple Lutz/triple toe loop combination and a triple loop and performed three Level 4 spins and a Level 4 step sequence to earn 79.13 points, the best score of his career for a short.

Hendrickx started the free in 7th, but the opening of his routine there didn’t go to plan. In particular, he had problems with the triple Axel, stepping out of the first and falling on a second attempt. While he skated the rest of the programme reasonably well, a free score of 142.26 meant that he ended up with a total of 221.39 and slid down to 9th overall. Even though things hadn’t gone his way in the free, he was still upbeat about equaling his best ever result at Europeans.

“It could have been better, but it could have been worse as well, considering the circumstances. I’m really happy the short was great. The free was, well the beginning wasn’t that great, but afterwards I think that I redeemed myself and I fought till the end.

“Of course, you don’t want to do mistakes, but my practices at the moment weren’t going great. We had an evaluation afterwards and my coach said considering the whole training towards here that I did an amazing job.

“I’m satisfied with the result and now I have the Belgian record score in total under my name in a European or World Championships. This is the third time I am 9th, but the previous two times I only got 204 and 205 points, so I think I improved.”

The previous Belgian record holder was Kevin van der Perren and his illustrious career is the mark by which all Belgian skaters are measured by, including Hendrickx.

“He has been a very good example for me and he really was my idol. I looked up to him and I had a lot of opportunities because of him. He always got two spots for Europeans and two spots for Worlds so I’m really grateful that I got the opportunity to get these experiences when I was younger and because of him a lot of doors opened.

“He is a great jumper and he can still do quad toe and triple Axel even though he’s 31 or 32 now. I think he has a natural ability of jumping and it’s just incredible. A lot of people in the Belgian media compare me with him, but they never consider that the level of skating has improved so much in the few years since he was twice a medallist. Now everyone is doing quads and triples and on top of that you have to be special and have a different way of skating.”

Hendrickx started out skating for fun and only took it up seriously relatively late. As a result, he always feels like he has been on the back foot when it comes to the technical requirements of the sport.

Speaking of major injury, Hendrickx’s sister Loena has had to cope with a serious spinal injury that has sidelined her for most of this season and forced her to miss Europeans and Worlds despite earning the minimum technical scores to compete in both.

“Hopefully she is back on the ice soon and gets the preparation for next year’s Worlds because she still needs to make her international senior debut. I just wish her the best and she is a hard worker. She was one of the motivations for me to come back here because last year was a very hard period. I had thoughts in my head like ‘Is it going to be fine? Am I going to be on the same level? Can I perform again? Can I do these jumps?’ When I saw her work at it, I really pulled myself up towards her. I hope I can do the same now with her and we can start very strong next season.”

Looking ahead to this week’s Worlds in Boston, the Belgian is not overly fixated on any specific result to close out his comeback season.

“I hope I can perform the same short as I did at Europeans. If I can manage to do it there and have small improvements in the free, like with the Axel, I’ll be happy. Placements I can’t predict because it depends how I skate and how other people skate. At Europeans this year, it was a very high level. If I skated the free programme I did this year at Europeans two or three years ago, I would have been much higher. Besides I’m not the kind of person who cares too much about placements. I try to enjoy myself and please the crowd, the judges and my coach. I’m happy with my results at Europeans and how I skated. I think that’s the most important.”