There has been no rise more meteoric this season than that of France’s Gabriella Papadakis and Guillaume Cizeron. From 13th place at the World Championships in Japan in March of last year, they made everybody sit up and take notice when they claimed gold at Cup of China in November and defeated World champions Anna Cappellini and Luca Lanotte in the process. They proved that they are going to be a force to be reckoned over the coming years by subsequently winning the Trophee Eric Bompard and taking bronze in the Grand Prix Final in Barcelona. Romain Haguenauer, the man behind the team, believes that they timed this season to perfection.

“It’s a new Olympic cycle so we knew it was the time to be good. You always have to be good, but if they wanted to aim for a high place at the next Olympics they had to start this season because so many couples stopped competing.”

“They were 15th at Europeans and 13th at Worlds in 2014 which was not too bad because last year they were still junior in terms of age. This season is their first proper one in senior due to their age because of Gabriella. Guillaume could be a junior for two more years. It’s always difficult for even the top junior teams to start their senior career.”

The last six months has seen huge changes professionally for Haguenauer. After coaching with Muriel Zazoui in his hometown of Lyon for seventeen years, he decided that he needed a new challenge and moved to Montreal to work with former pupils Marie-France Dubreuil and Patrice Lauzon.

“It was difficult and at the same time not because I took the decision quite quickly. I had opportunities so I was ready to do it. I was born in Lyon and I spent all my life there so to change was a problem to manage, but it was something I wanted.”

Haguenauer was part of the coaching team for the Canadians and, under his and Zazoui’s tutelage, they twice became World silver medallists before announcing their retirement from competition formally in 2008. For a number of years they skated in shows before they opened up their own ice dance school at the Gadbois Centre in Montreal.

“They started their school three years ago. I had some problems and I didn’t know if I wanted to stay in Lyon. When I told them I was on holiday in North America, so I explained a little bit about my situation. They said to me ‘If one day you decide you want to go somewhere else, we want absolutely for you come to work with us because you have the experience and I think we will be very complementary.’ So I said yes, but it was a very quick decision. Afterwards I thought, ‘Oh my God, what have I done?’ But it’s good and I am happy with the work we are doing. It went very well immediately from the first day even though I had only known them previously as students of mine and not as coaches. The way they work is familiar to me.”

Before he made his move to Montreal, Haguenauer had to break the news to his students in Lyon, including Papadakis and Cizeron. The young French team also made up their minds swiftly to go with their coach to Canada.

“I announced to all the skaters I taught in Lyon that I would move. Then Gabriella and Guillaume said, ‘We want to follow you.’ Perhaps it was because they already had done the same thing three or four years ago when they moved to Lyon to train with me. They said, ‘We want absolutely to stay with you because we trust you and we also think in Montreal it will be good for us too.’”

At their new Canadian base, Haguenauer, Papadakis, Cizeron and their team set about working on their programmes for this season and in the process came up with one of the most memorable and innovative ice dance routines of the last decade. The vision to skate to Mozart’s “Adagio from Concerto No. 23” came from Haguenauer, but he broached the subject of skating to it in of all places a Tokyo hospital ward.

“I discovered the ballet “Le Parc” maybe two or three years ago. My sister told me, ‘Watch this, it’s fantastic.’ So I did and I fell in love completely with it. For me Mozart is nice, but it’s not my style. I don’t like really classical music, but when I watched the ballet I loved it. However, I never thought to use it for Gabriella and Guillaume. Last year at the World Championships in Tokyo, Gabriella had a problem with her eyes. She was in hospital and she couldn’t practice for three days. She had a bad infection. We spent three days at the hospital together and we talked about this season. I told her there is a fantastic piece of dance I love. I didn’t tell her it was Mozart because I knew they would say no! So I said, ‘Go watch on YouTube and tell me what you think.’ Luckily they loved it too.”

“Le Parc” was created by choreographer Angelin Preljocaj for the Paris Opera Ballet, the oldest national ballet company in the world, in 1994 and dwells on the themes of the ebb and flow of passion and the war of the sexes. It is a deeply sensual piece of work that requires a maturity to portray which is why it’s all the more surprising that two ice dancers out of juniors less than two seasons have been able to transfer it onto the ice so seamlessly. Haguenauer points to the character of his two charges and the work they have done off-ice in preparation.

“I think inside themselves they have a lot of things to say. They are mature with regard to expression basically. They also have worked a lot in Montreal with a performance coach who used to be with Cirque de Soleil. She worked a lot at the beginning of Cirque de Soleil to give expression to the circus performers. She also works with singers, actors and skaters. The rapport between her and Gabriella and Guillaume is very good. She makes them do some crazy exercises. For example, they skate, but do their programme without music and instead they have to sing the music. She goes deep inside them to make sure the feeling is right. They understand it. They follow, they trust. I think it’s because of that work that they are able to perform the free in this way.”

Haguenauer also realises that he has been blessed to be able to work with two skaters who are so technically gifted and possess qualities that he feels are essential for an ice dance partnership.

“Their greatest strength for me is their knee action. They are very soft on the ice and powerful. It’s what I like, so we work a lot that way. They can create speed very easily because they use the body transfer and strong knee action. They don’t have to push too much to get a lot of speed which for me is the most important thing in ice dance.”

Papadakis and Cizeron have been a team for a decade or so and Haguenauer has known them for much of that time. Their previous coach was Gabriella’s mother, Catherine Papadakis, who they trained with in their hometown of Clermont-Ferrand. Haguenauer first met them when they were fourteen year old and at novice level. They came to him during their holidays to train and finally switched to being coached by him full-time almost four years ago. Haguenauer immediately recognised in them the ability to make it all the way.

“They match each other very well. They are very nice kids and very clever, but they also have a lot of ambition inside. What I really like is that they are focused on what they want to become. For example, the first thing I liked about them was when they went to the Junior Grand Prix Final two years ago, three seasons ago in Sochi. It was for them the first time they saw the top seniors in action. They had never seen Meryl (Davis) and Charlie (White) or Tessa (Virtue) and Scott (Moir) live before, so they watched them. Then they said, ‘It’s OK, but for us it’s not what we want to do.’ They want to be different and not exactly like any other team. They don’t look left and right which I think is good. They follow their own path.” 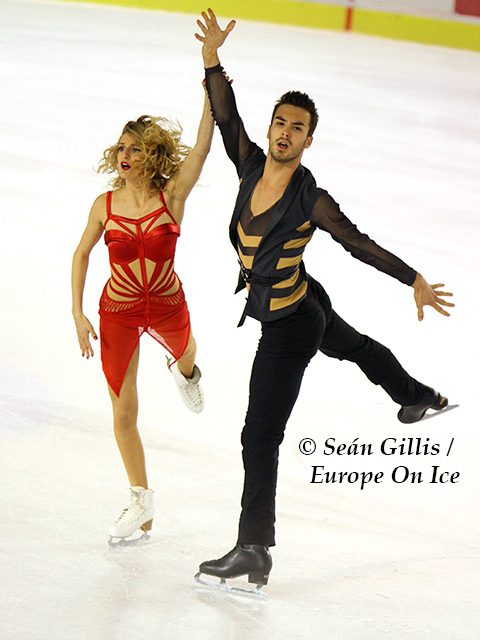 The last five seasons in ice dance had been dominated by the lyrical Virtue and Moir and the dynamic Davis and White and many lower ranked teams had sought out Marina Zoueva and Igor Shpilband, before and after their training group split, to create programmes in a similar mould. That was never going to be an option that would satisfy Papadakis and Cizeron.

“It’s easy when you have some example of a successful team to follow them. But they are not like that and that’s why maybe they appear different to the others.”

The retirement of Brian Joubert and Nathalie Péchalat and Fabian Bourzat after last season means that Papadakis and Cizeron now carry the weight of expectations from their federation to keep the sport of figure skating in the eyes of the French public. Haguenauer is confident that they will rise to the challenge.

“Everyone now has great expectations for them, but it’s always like that when you do well. It’s not so bad for them now because they are in Montreal and a little apart from that. When you are good you will always have pressure and it will only get worse with more and more pressure. That’s sport so they have to learn that. I think they can cope with it because as I said they don’t get distracted. I don’t think they are people who spend all their time reading articles about themselves. They do the work, they do the competitions and come back to work again.” 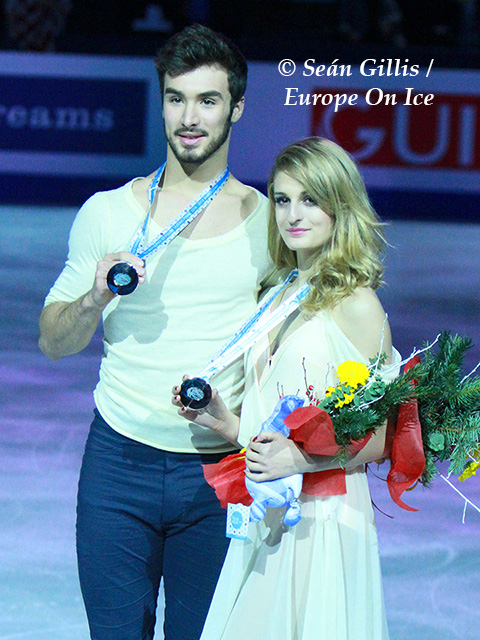 The next step for Papadakis and Cizeron is this month’s European Championships in Stockholm. They go in as the favourites for gold and the highest ranked European team this season after their bronze medal in Barcelona. Haguenauer is under no illusions that the outcome is predetermined, but he has high hopes for his team.

“When you compete, you always want to be first. I hate to not be first! Europeans will be another competition though. Anna (Cappellini) and Luca (Lanotte) were not ready at all in China. They skated badly, but even at the practices they couldn’t manage and you could tell they were not ready. If they come back at Europeans stronger, it will be a different competition. Everything is open. Of course, we want the gold medal and I think it’s possible on paper. We will see.”