With the last of the remaining spots in the Grand Prix Final on offer, thirty-eight entries from twelve countries descended on Osaka for the NHK Trophy which was held in the city for the first time since 2005. While some crumbled under the pressure of expectations, others rose to the challenge and secured their berths.

Daisuke Murakami only finished tenth at last season’s Japanese Nationals and this weekend he was skating in his only Grand Prix assignment. If his placing of third in the short programme here was a surprise, what transpired in the free skating was a revelation. Murakami had what was probably the skate of his career in a routine to Rachmaninov’s “Piano Concerto No.2” that included two quadruple salchows, two triple axels and four other triple jumps and at times reminded of that other Daisuke. He became the third Japanese man to win a Grand Prix event this season.

The three men who had been widely expected to advance to the Grand Prix Final did so, albeit in an unforeseen manner. Sergei Voronov had been poised in fourth place going into the free, but was able to pull up to finish second overall with a very solid skate to bring himself another silver medal to go with the one he took at Rostelecom Cup. The Russian will participate in the first Grand Prix Final of his career in Barcelona.

At Skate Canada Takahito Mura had performed superbly to win his first Grand Prix title and he had scored a new personal best of 86.28 to sit in first place going into the free. However, things fell apart for the Four Continents champion with a step out on his opening quadruple toe loop attempt, a singled triple axel and a double-footed triple flip. Despite the poor skate, Mura was able to cling to the podium and also book himself a ticket to Spain.

Sometimes the margins in skating are waifer thin and 0.15 points made a huge difference to the composition of the men’s event at the Grand Prix Final. Yuzuru Hanyu had been languishing in fifth place after falling on a quadruple toe loop and botching a triple lutz combination in the short. The Olympic champion couldn’t even manage to pull off any quads in the free and only one triple axel. 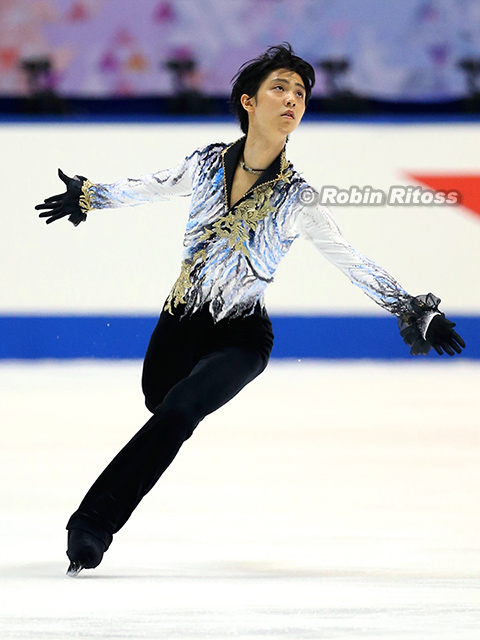 By contrast, Jeremy Abbott had performed a short programme that didn’t contain a quad, but was clean. This had placed him second going into the free where again he skated conservatively. Unfortunately, he also made a couple of errors that dropped him down to fifth overall and pushed Hanyu into fourth. Had the standings been reversed, Jason Brown would be Barcelona bound and the World champion would be staying at home.

The main feature of this season’s ice dance events has been an uncharacteristic predictability and the NHK Trophy was no exception. It seemed that Kaitlyn Weaver and Andrew Poje and Penny Coomes and Nicholas Buckland were pretty much locks for the last two spots at the Grand Prix Final. This scenario had been consolidated by the aforementioned teams going one-two in the short dance, although Coomes and Buckland did not have as much of a cushion on the teams behind them as they would have liked. 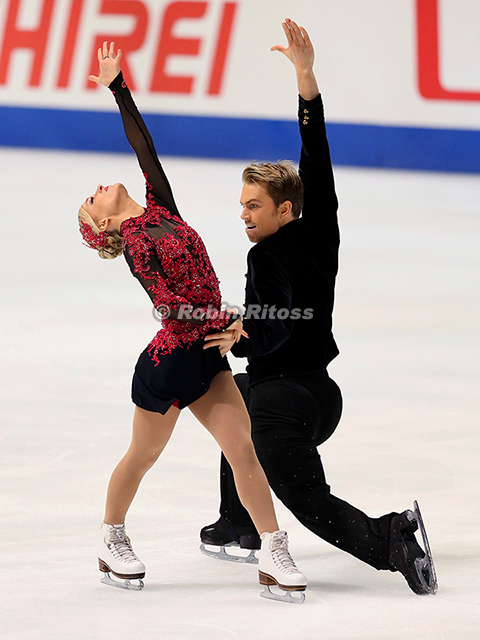 While not their very best, the Canadians cruised through their “Four Seasons” free and made not huge errors to win their second Grand Prix title in four weeks. This will be the World silver medallists’ fourth trip to the Grand Prix Final and it’s an event at which they have yet to medal. They’ll be aiming to rectify that in Barcelona. 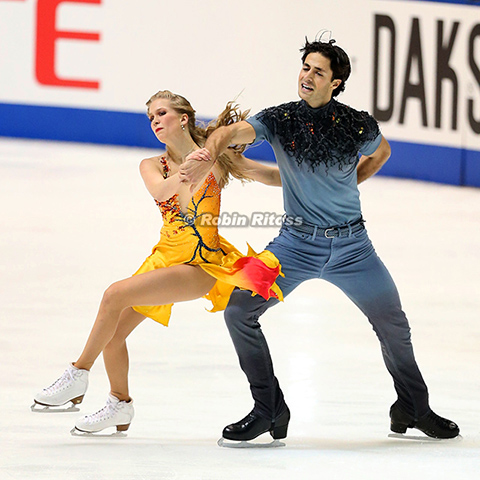 Weaver and Poje will not be joined by Coomes and Buckland in the Catalan capital. The European bronze medallists had a nightmare of a free that was plagued by low levels on many of their elements and a fall by the couple during their midline step sequence for which they got no points. They tumbled out of the medals and wound up in fifth. The new team of Elena Ilinykh and Ruslan Zhiganshin will now instead make their debut at the Grand Prix Final in place of the British.

Ksenia Monko and Kirill Khaliavin will understand how Coomes and Buckland feel as they had also been in second at Skate Canada before being bumped off the podium. It was a happier ending in Japan for the Russians as they claimed silver, their first Grand Prix medal. Kaitlin Hawayek and Jean-Luc Baker, the reigning Junior World champions, were awarded bronze.

While their former partners march on to the Grand Prix Final, Victoria Sinitsina and Nikita Katsalapov will be left licking their wounds after a spectacularly awful competition. The Russians fell on a curved lift and then aborted a second lift attempt in their free dance. They finished last in that segment and their technical elements score of 29.54 was the lowest of any team on the entire Grand Prix Series this season. 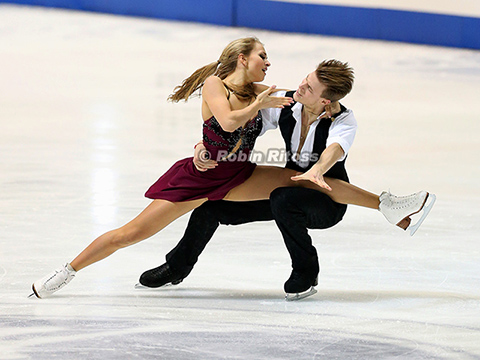 Four ladies at NHK Trophy had a shot at making it to the Grand Prix Final, but in the end only Gracie Gold will be making the trip to Barcelona. The U.S. champion bagged her first ever senior international title with a very good short and a solid free that was marred only by a doubling of a triple flip and a fall on a triple salchow. Gold’s coach Frank Carroll had a great weekend as he also teaches men’s NHK Trophy 2014 champion Daisuke Murakami.

Alena Leonova had no chance herself to make the Grand Prix Final, but she did play spoiler to the other ladies and in doing so picked up her first Grand Prix medal since 2011. As well as her silver medal, the Russian will walk away from this year’s NHK Trophy with a personal best of 68.11 for her short which goes to show that she should not be discounted in the race to be named to her country’s team for the European Championships in January.

For the first time since the 2000/2001 edition, there will be no Japanese female singles skater in the Grand Prix Final. This year’s bronze medallist Satoko Miyahara was dogged with under rotation calls in both segments of the events, while Kanako Murakami imploded in the free with a fall on a triple flip and her final jump combination not receiving any credit at all as it fell afoul of this season’s new rule about limitations on repeating double jumps. Along with Rika Hongo, both ladies are on the Grand Prix Final alternates list should any of the qualified skaters pull out. 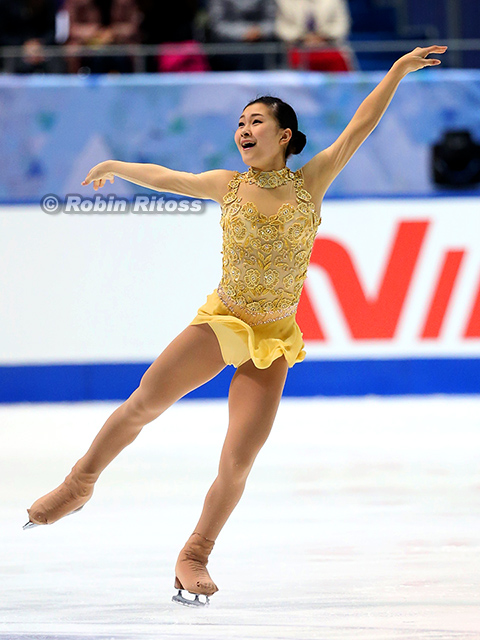 By contrast with the other disciplines, all three medallists from the pairs event at NHK Trophy will be in Barcelona. Meagan Duhamel and Eric Radford backed up their win on home soil at Skate Canada with a second triumph in Osaka. The two-time World bronze medallists had a lacklustre outing of their “Muse” free with a fall on a quad salchow throw attempt, Duhamel doubling a triple toe loop and stepping out of a triple lutz throw.

The Canadians fared better than Yuko Kavaguti and Alexander Smirnov however. Kavaguti fell a triple toe loop and a quad salchow throw which put them down to third in the free and second overall. Both the Russians and the Canadians will be hoping for much better in two weeks’ time. 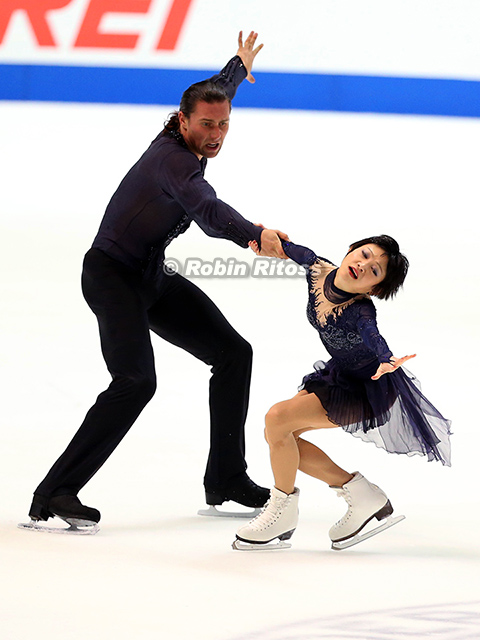 Xiaoyu Yu and Yang Jin rung up the highest technical elements score of the free and their third place put them through to the Senior Grand Prix Final for the first time. The Chinese won the junior version of the event last year in Fukuoka.

Italian anti-doping prosecutors made it known on 28 November that they would be seeking a four year ban from competing for Carolina Kostner due to allegedly aiding and abetting her former boyfriend race walker Alex Schwazer in avoiding out of competition drug tests. The 2014 Sochi Olympic bronze medallist has denied all knowledge of Schwazer’s use of prohibited substances that saw him banned for four years prior to the London Olympics in 2012.

Nathalie Pechalat and Brian Joubert did very well on the fifth season of French channel TF1’s “Danse avec les stars”, but they just missed out with the former coming second overall and the latter third. Despite Péchalat has scoring the highest marks from the judges out of the dancers in the finale on 29 November, the public vote was won by actor Rayane Bensetti.